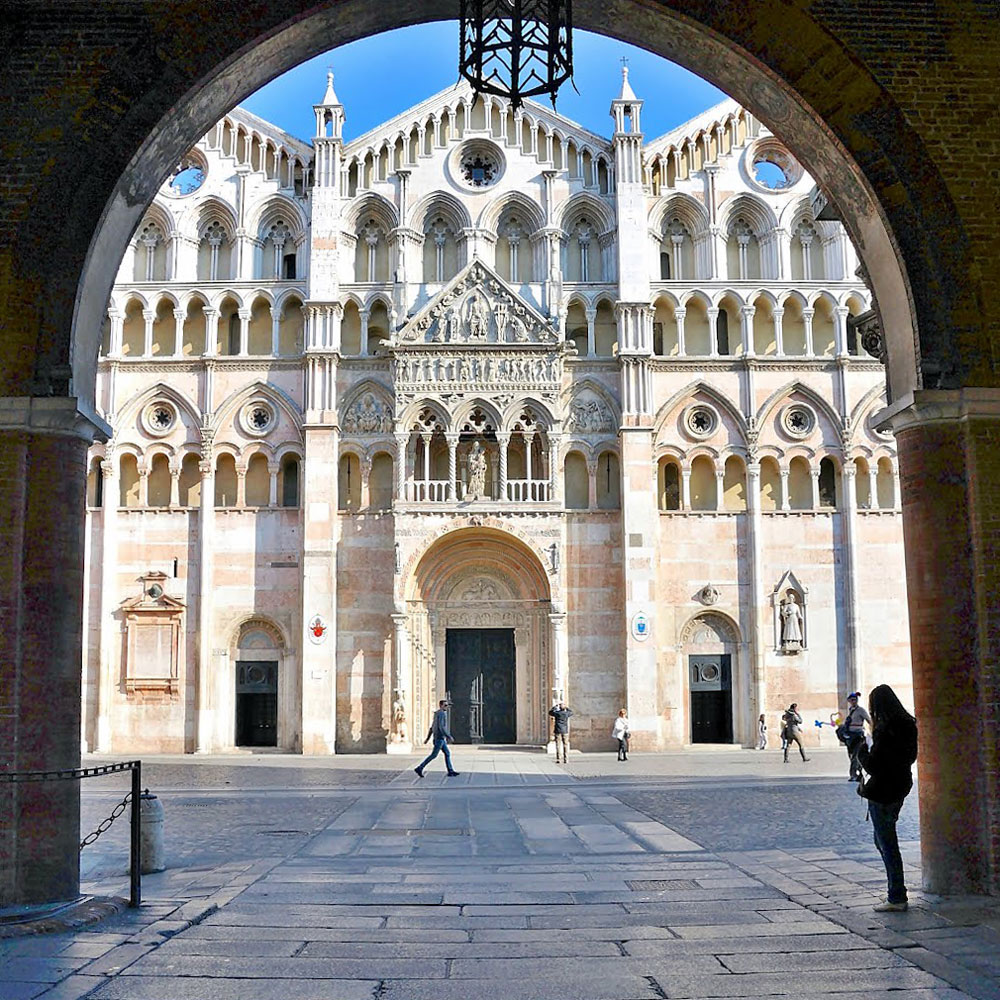 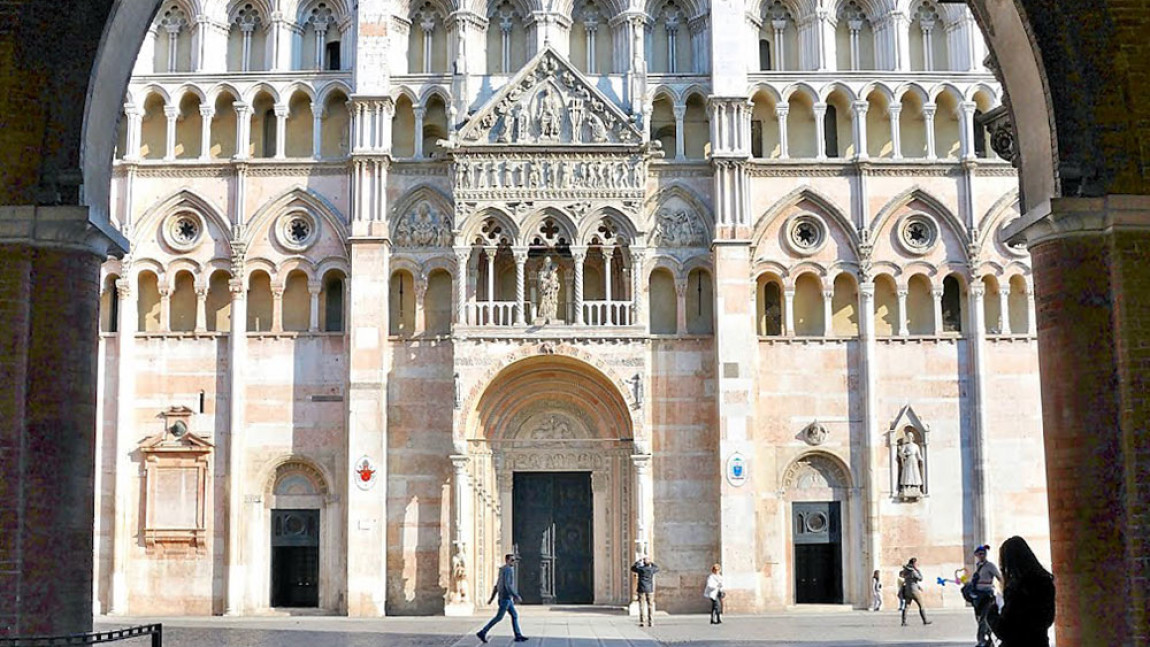 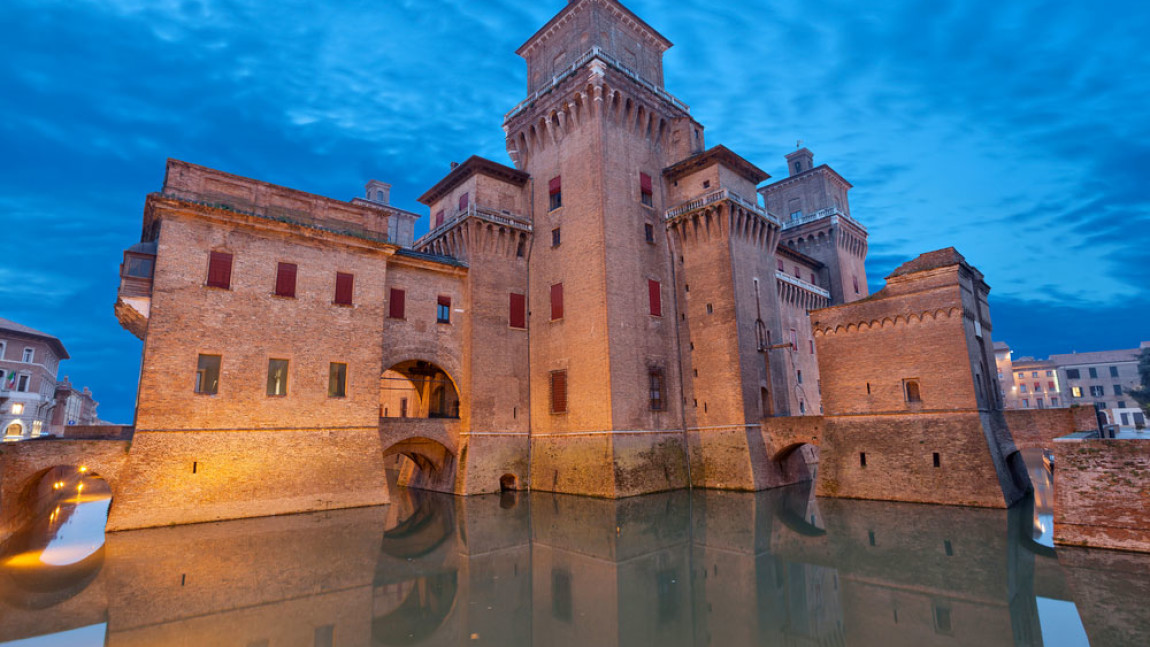 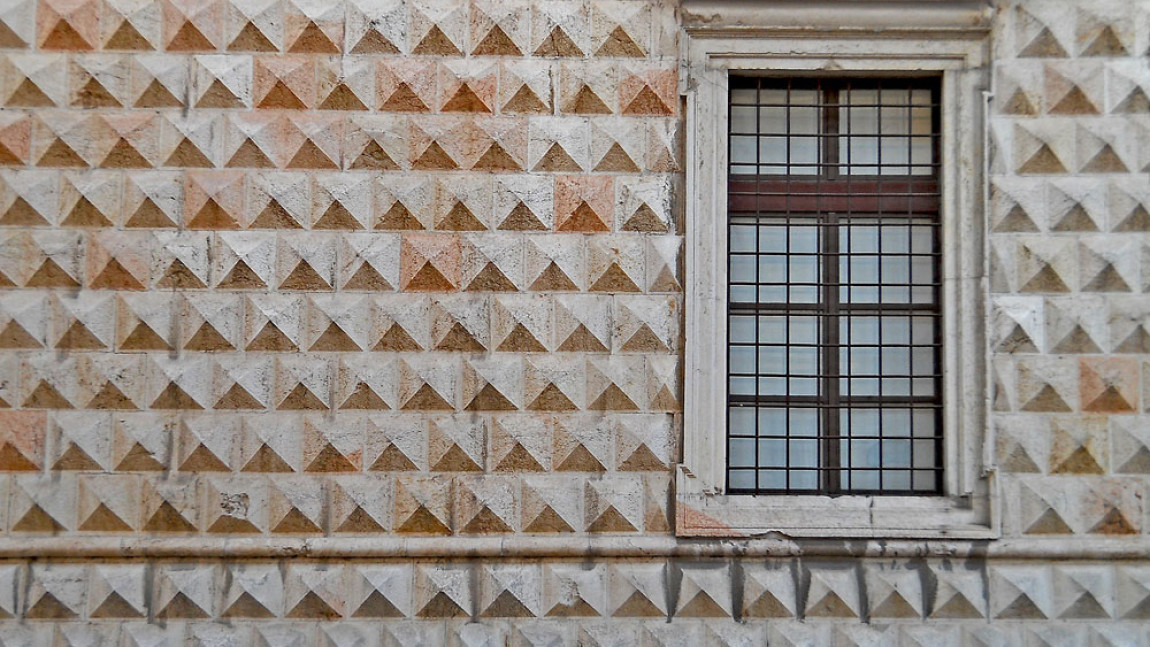 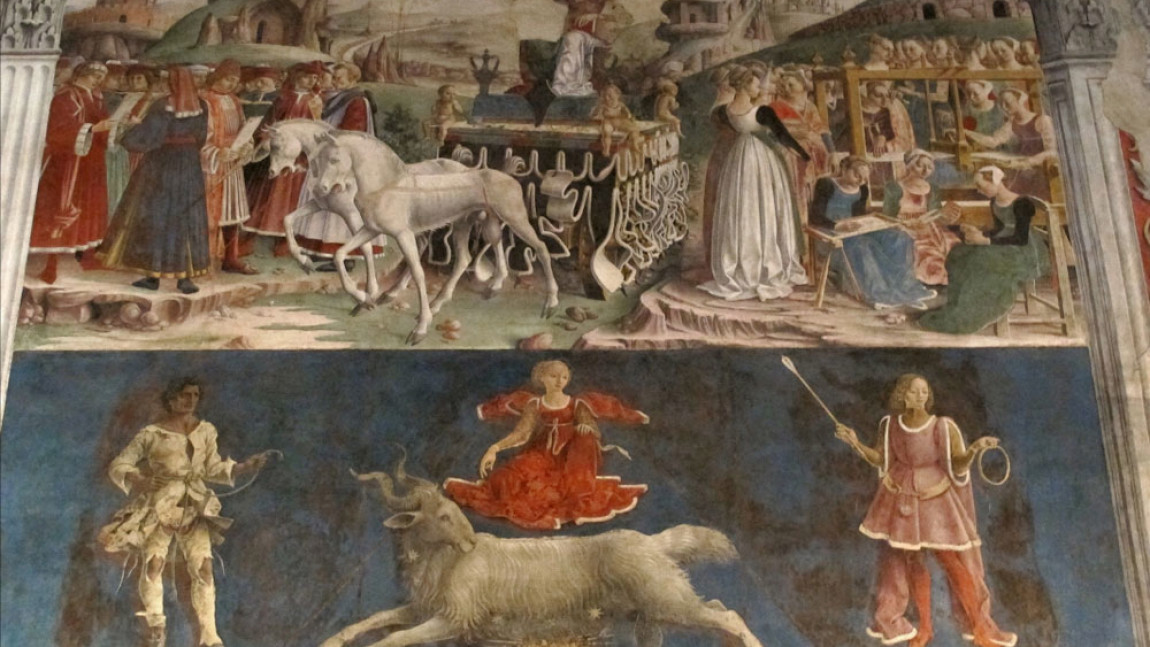 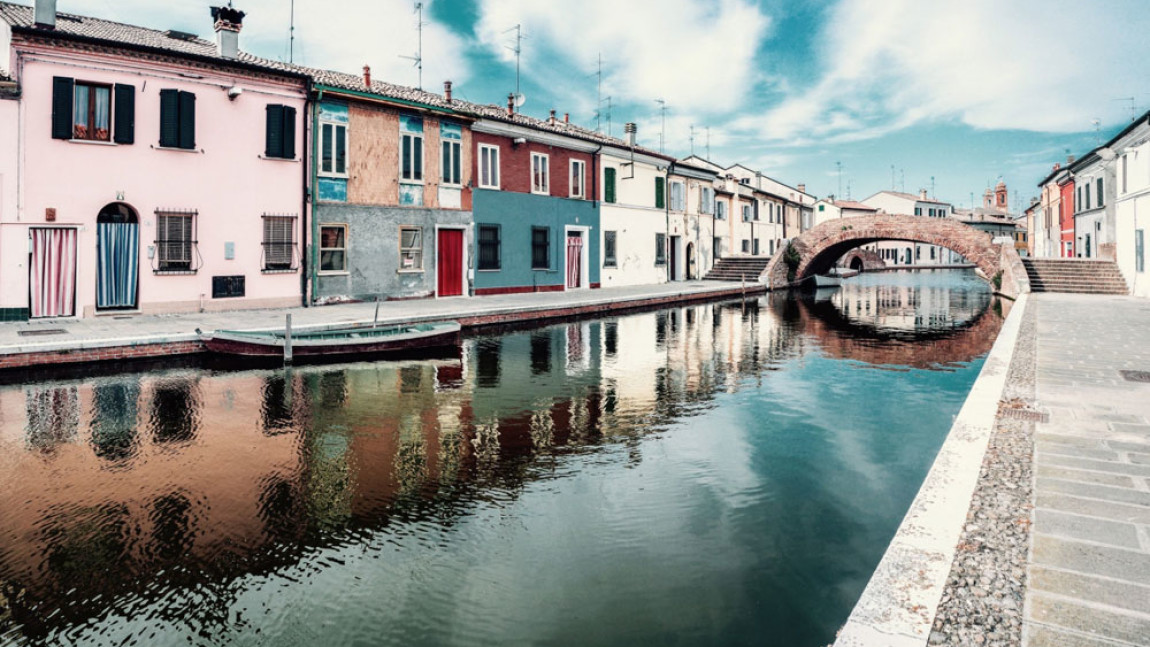 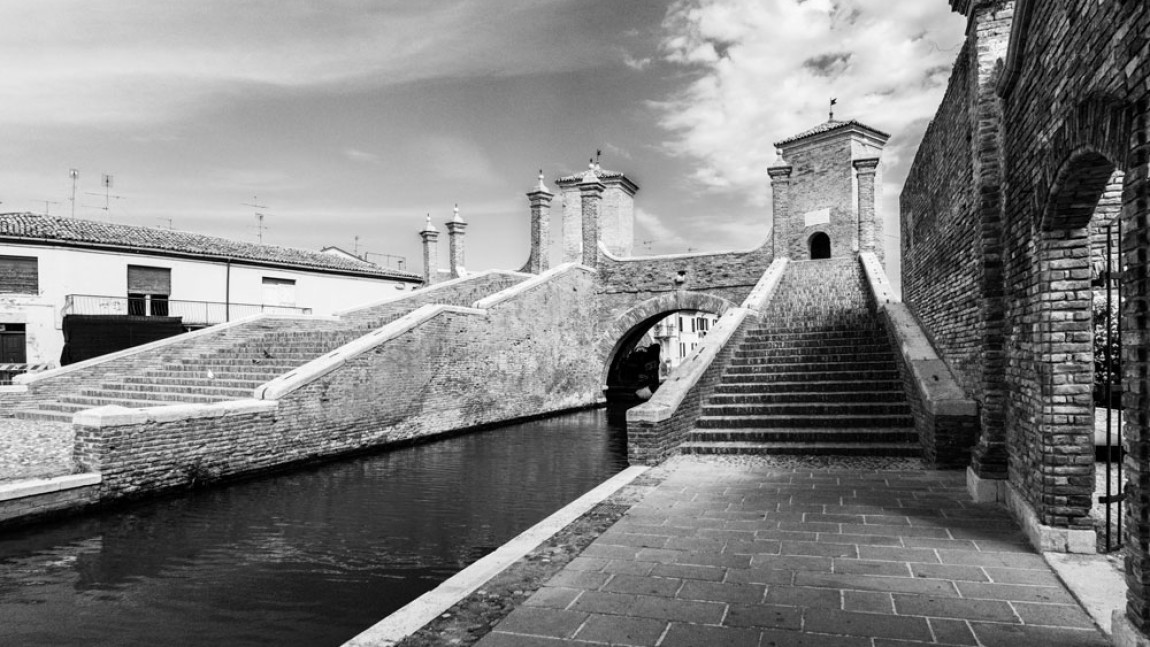 Pearl of the Renaissance, admired for its urban structure which survived for centuries thanks to the vision of the Duke Ercole I d’Este and the brilliant mind of architect Biagio Rossetti, Ferrara was recognized a World Heritage Site by UNESCO in 1995.

Ferrara is not only the first modern city in Europe, the city where the first urban planning was ever made in modern era, but also one of the few Italian cities which preserves its walls intacts. Nine kilometers of city walls surround the city centre and its precious monuments: kilometers of red brick and tree-lined avenues, surrounded by greenery and silence, which can be easily covered on foot or by bicycle, where doors, passages, towers and bulwarks testify to the various changes in defensive techniques over time.

Ferrara is a city to be enjoyed slowly walking through its wide quiet streets, to discover its character of magnificent Renaissance capital in every corner. From the Certosa to the Palazzo dei Diamanti, Piazza Ariostea and the ancient Castello Estense, in an endless series of surprising views and perspectives, the city designed by architect Rossetti still fascinates for its “desolate beauty”, praised by Gabriele D’Annunzio (Cities of silence).

In Ferrara one seems to relive the magical atmosphere of the past at every step. Ludovico Ariosto lived here and probably wandered in the new part of town, called Arianuova, where Torquato Tasso completed The Jerusalem Delivered.

Passing the Castello Estense, formerly fortress and then ducal residence, the seat of a court that competed with the largest in Europe for splendour and magnificence, we reach the heart of the medieval town, dominated by the Town Hall and by the bulk of St. George’s Cathedral, outstanding example of Romanesque-Gothic religious architecture. On the left side of the Cathedral, there is the loggia of the Merchants, occupied by colourful shops and workshops since medieval times.

We then walk through the narrow and picturesque streets of the Jewish Ghetto, which preserves the memory of one of the oldest Jewish communities in Italy, up to the picturesque Via delle Volte, a witness of the intense commercial traffic held on the ancient course of the Po River in medieval times.

Advancing into the medieval area it is possible to discover jewels of religious art such as the Monastery of St. Antonio in Polesine with its frescoes by the school of Giotto and the Church of Santa Maria in Vado, a pilgrimage site after the Eucharistic miracle that occurred there in the 12th century.

With a full day available, it is be possible to visit the Castello Estense, in order to discover its rooms and the Este household affairs, and the Cathedral Museum with its works of art such as the organ doors depicting the Annunciation and St. George slaying the dragon by Cosme Tura (1469), the great master of the Ferrara school, Our Lady of the pomegranate by Jacopo della Quercia and the celebrated reliefs showing the months of the year , which were a part of an ancient door of the Cathedral.

We then reach Palazzo Schifanoia, place of “delights” wanted by the Este family at the end of the 15th century, which holds the famous Hall of months frescoed at the behest of Borso d’Este by the masters of the great Renaissance school of Ferrara Francesco del Cossa and Ercole de Roberti around 1470.

With more time available, we could visit the National Art Gallery, inside the Palazzo dei Diamanti, and learn about the great masters of the “Ferrara workshop”, brilliant and bizarre characters of the Ferrarese Renaissance such as Cosme Tura, Ercole de’ Roberti, Ludovico Mazzolino, Ortolano and Garofalo.

Alternatively, we could visit Palazzo Costabili, also known as the Palace of Ludovico il Moro, a magnificent building of the Ferrara Renaissance, which houses the Archaeological Museum of the city. The museum preserves relics of great importance and beauty from the Etruscan city of Spina, on the Adriatic Sea, which flourished between the VI and III centuries BC, and the Treasure Room, painted by Garofalo and Dosso Dossi in the early 16th century, on the ground floor.

A further possibility is a visit to the Jewish Ferrara and the places of Giorgio Bassani.

FERRARA AND ITS PROVINCE

The territory is full of seductive and charming places which deserve to be discovered and visited as Cento, the Strada Romea, the Pomposa Abbey, the Great Forest and the Castle of Mesola, Comacchio and the Po Delta.

The tall shape of the bell tower with yellow and red coloured bricks appears suddenly in the green of the plain announcing the presence of the complex, the monastic village of Pomposa. The origin of the Pomposa Abbey dates back to the 6th -7th  centuries, when a Benedictine settlement arose on the Insula Pomposia, a wooded island surrounded by two branches of the river and protected by the sea. The abbey which owned vast and fertile lands reached its period of greatest splendor after the year 1000 under the guidance of Guido of Strambati. The monastery welcomed celebrities such as Guido d’Arezzo, Bonifacio of Canossa, the Countess Matilde’s father, San Pier Damiani and Dante Alighieri. The Basilica of Santa Maria keeps a precious 12th century cosmatesque and mosaic inlaid stone floor and frescoes on the apse by Vitale of Bologna and his assistants. The chapter hall is decorated with early 14th century frescoes by a pupil of Giotto.

Comacchio is a small lagoon town where time seems to stand still between canals and bridges, which make it similar to a small Venice. The light that is reflected on the calm surface of the canals gives urban spaces a diffused brightness and a suspended atmosphere, which enchants while crossing the Ponte degli Sbirri and the Trepponti complex, Comacchio emblem, or sightseeing the characteristic Loggia dei Mercanti, the Cathedral dedicated to San Cassiano, the Portico dei Cappuccini with its succession of 142 arches and the beautiful Church of Santa Maria in Aula Regia. During the papal rule the town was characterized by an intense planning and construction activity which is proved by many elegant 17th century buildings.

The refined elegance of the seventeenth-century buildings could be misleading: Comacchio has far more ancient origins! Heir to the ancient Spina, among the most famous trading centres in the world, long disputed by Ferrara and Ravenna, Popes and emperors, this town allowed the exchange between two civilizations for centuries. This unique settlement was built in the late Roman period on a chain of surfacing islands in the Po estuary, in a strategic position for the control of the Adriatic routes and of the Po inland waterway. The Palazzo Bellini complex houses the Roman Ship Museum in Comacchio, which preserves the entire load of a Roman vessel of the imperial era (late 1st  century BC) intended for river trade and which should have gone up the Po Delta to reach the domestic markets of the Po valley. Not to be missed is the old Manifattura dei Marinati, today seat of the Museum of the eel, so as to plunge into a past of skilful gestures and ancient traditions and understand the deep bond of Comacchiesi with their water products.