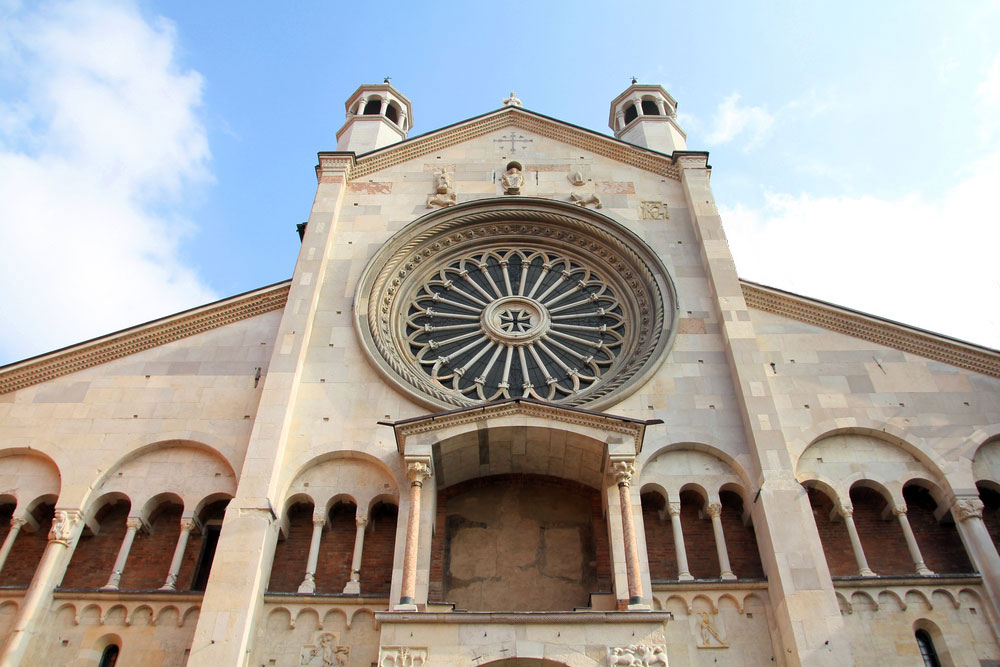 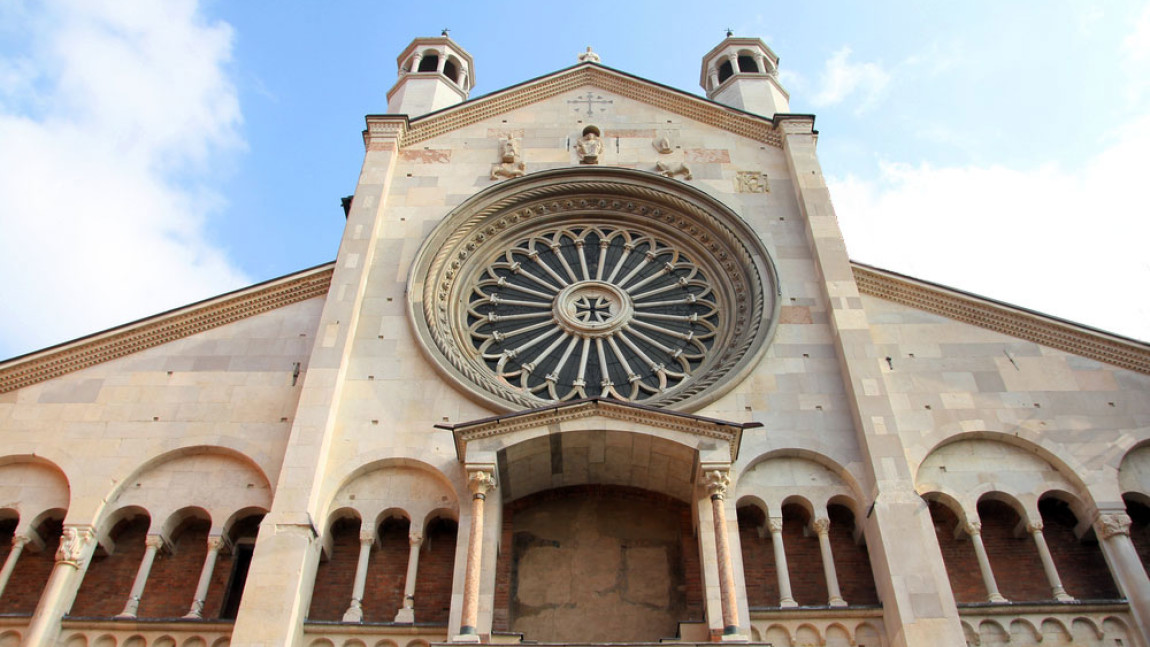 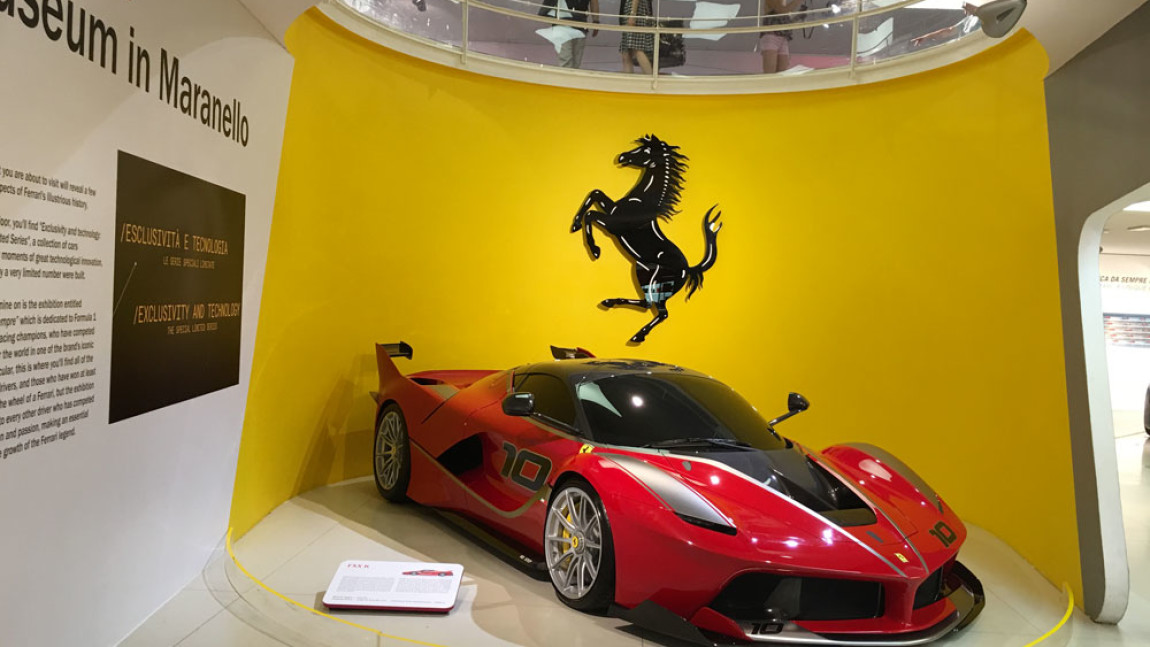 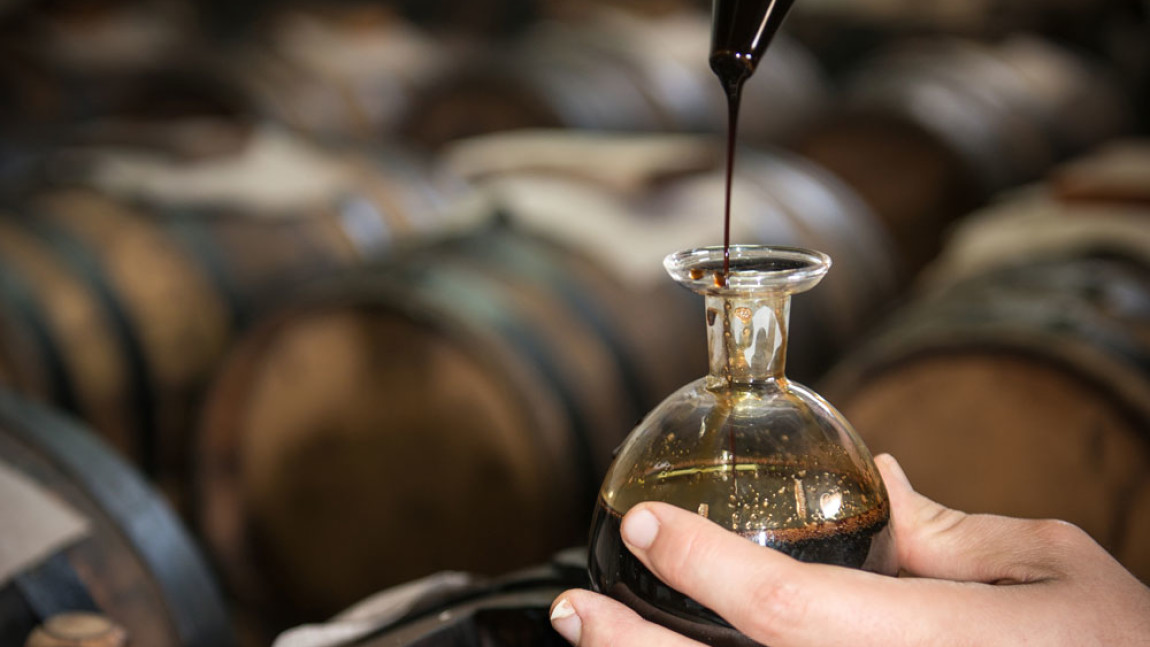 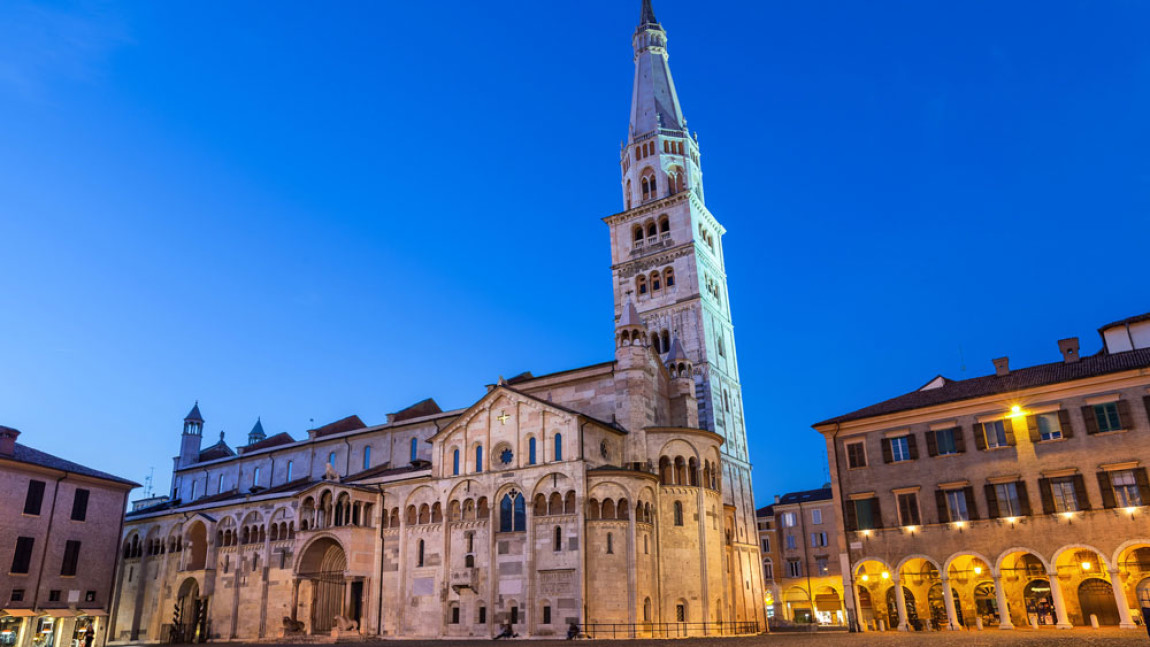 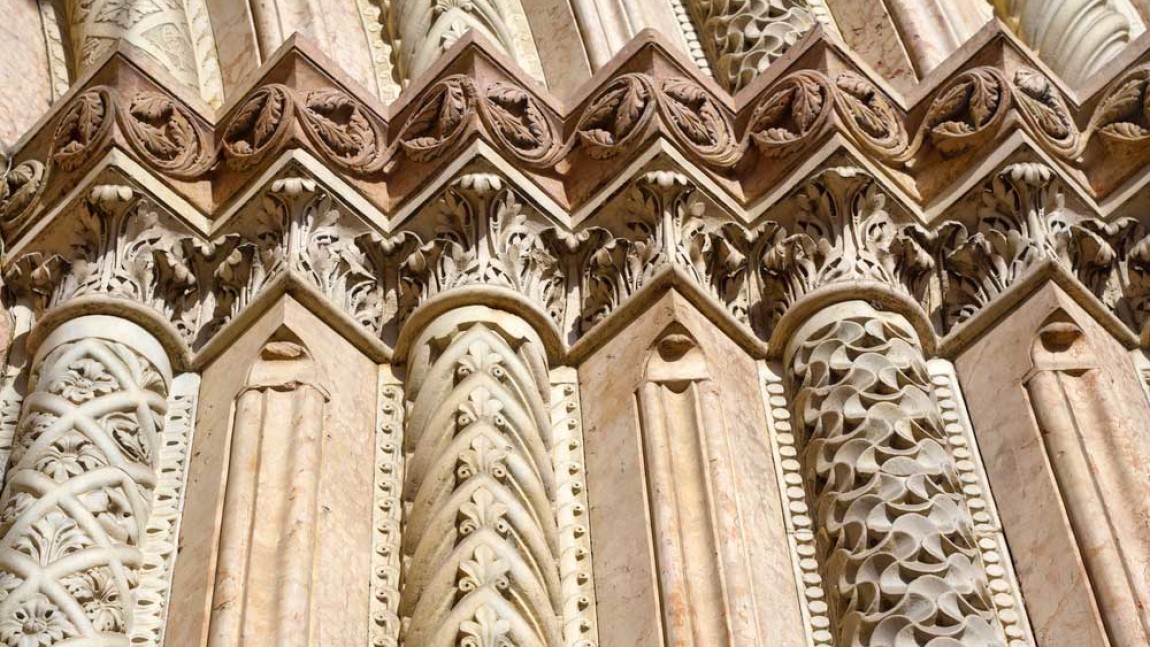 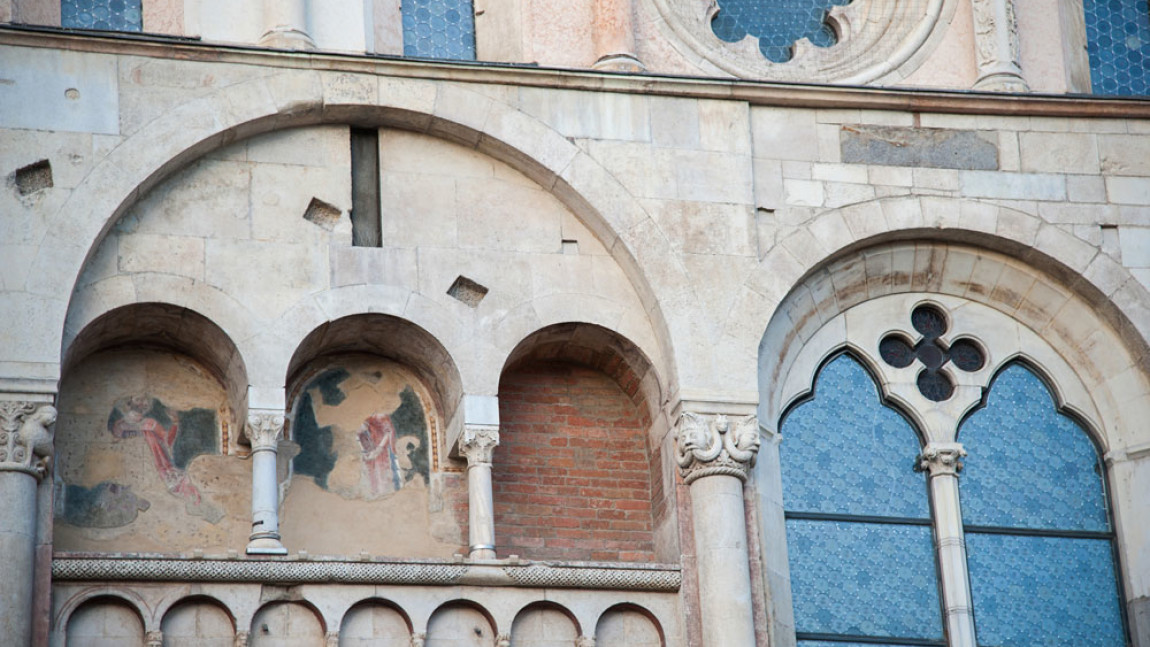 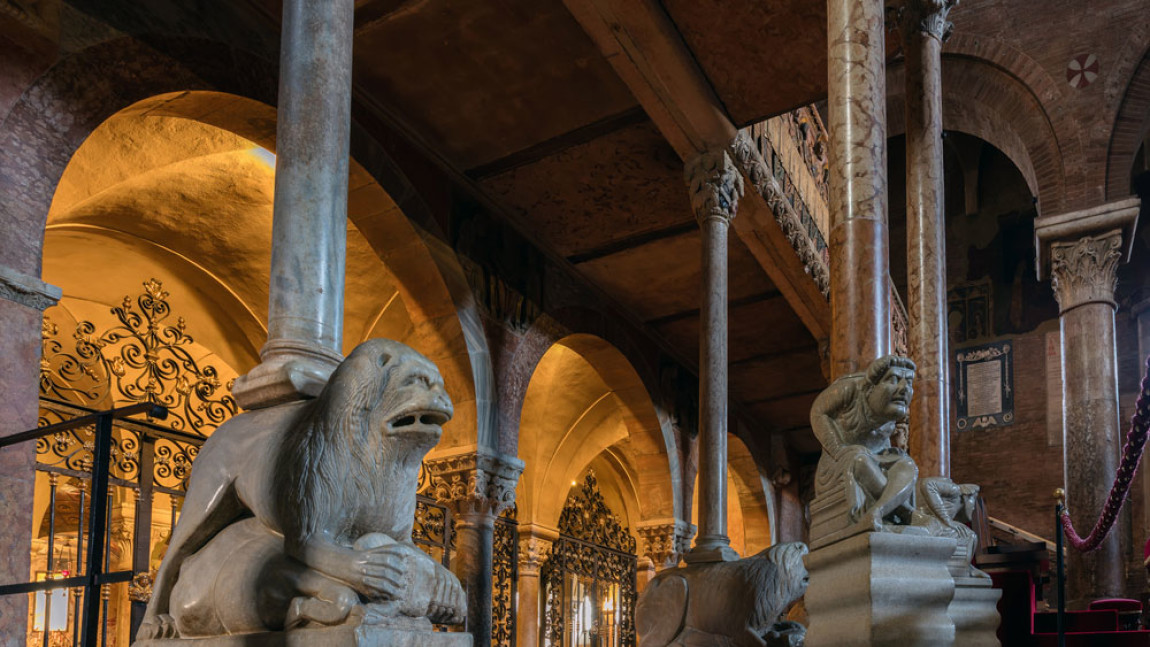 Synonymous in the world of good food and famous for the myth of Ferrari, Modena surprises its visitors with a magical combination of art, food and engines!

Modena is a quiet little town in Emilia, nestled in the middle of the Po Valley, which retains much of its urban layout dating from the late medieval and Renaissance period.

The old town of Modena developed on the Via Emilia, the consular road which was built a few years before the founding of the colony, holds in its heart the ancient Cathedral of Modena which, together with the famous Ghirlandina and Piazza Grande, has been designated one of UNESCO’s World Heritage Sites since 1997.

Started in 1099 by the architect Lanfranco, the Cathedral of Modena is one of the jewels of Romanesque architecture. It preserves on its facade the splendid sculptures made by Wiligelmo, characterized by a new sense of volume and great expressive power.

The interior contains other sculptural masterpieces: the ambo and rood screen made by the Campionesi masters during the 12th  and 13th  centuries, the Madonna della Pappa by Guido Mazzoni (1480) and the terracotta Nativity by Antonio Begarelli (1527). The Duomo Museums preserve valuable medieval works, including eight metopes with fantastic figures originally on the Duomo and the treasure of the Cathedral.

The Modena tour continues with a visit to the Town Hall, the 17th century building with porticos which combines the old Palazzo del Comune and Palazzo della Ragione, dating from medieval times. Here it is possible to visit the hall of the Torre Mozza, the Loggia and the corridors, the Camerino dei Confirmati  – which houses one of the symbols of the town, the Secchia rapita (the stolen bucket), reminding Modena’s glorious victory against Bologna in the battle of Zappolino in 1325, also narrated in the poem by Alessandro Tassoni – the Fire Hall, remarkable for the wooden coffered ceiling and the paintings on the walls depicting Modena under Brutus’ siege in 44-43 BC, a 16th century work by Nicolo Dell’Abate, the Hall of the Old Council and the Tapestry Room, with their decorations taken from the Greek-Roman world to exalt the civic virtues and the municipal government.

The Albinelli Historical Market, built in 1920s on the model of French markets in Art Nouveau style, can be reached after a short pleasant walk.

Nearby we find the College of St. Charles, the Foreign Prince’s Palace, the “Luciano Pavarotti” Municipal Theatre, witness of the bel canto tradition of Modena, and the romantic Mazzini Square – once a Jewish Ghetto – with beautiful Art Nouveau mansions.

Modena was also the capital of a Duchy and retains architectural gems such as the Palazzo Ducale, one of the greatest Baroque buildings in Italy, which hosted the Este court settled in Modena from Ferrara in 1598. The Ducal Palace, now the headquarters of the Military Academy, was designed by Avanzini and later other architects like Vigarani and Soli worked on it.

In the afternoon we reach the Palazzo dei Musei, originally Poorhouse founded by the Estes, to learn about the recent history of the town, which was the capital of the Duchy of Modena since 1598.

The Palazzo dei Musei houses the Estense Gallery, which contains the remains of the large collection of the Dukes of Modena after the sale of 100 masterpieces by Francis III in 1746 (works by Bernini, Correggio, Nicolo dell’Abate, Mazzoni, Begarelli, El Greco, Velasquez, Reni, Guercino and others), the Lapidary Museum, which keeps all the evidences found from the Roman period in the Modena area, the Civic Museums, divided into the sections of Archeology, Medieval and Modern Art, the Gandini Collection of over 2000 pieces of fabrics produced between the 11th  and the 19th  century, and the Biblioteca Estense, which preserves an important manuscript collection, boasting specimens such as the Bible of Borso d’Este, admirable work composed in the middle 15th century Ferrara.

Adjacent to the Palazzo dei Musei is the Church of St. Augustine, also called Pantheon Atestinum, initially chosen as the site of burial of the Este Dukes, whose glories are narrated on the numerous paintings. Erected during the 14th century on the site of an earlier church founded in 1245 by the Augustinians, it gives a 17th century appearance. Among the testimonies of the ancient church is the fresco of Our Lady of Consolation, a delicate Virgin feeding the Child by Tommaso da Modena. Worth noting for its dramatic intensity is the terracotta sculpture of the Deposition of Christ from the Cross, a masterpiece by Antonio Begarelli.

The discovery of the town can be completed with a visit to St. Francis’ Church or St. Peter’s Abbey, rich in works of art and authentic celebration of the great sculptor Antonio Begarelli from Modena, whose tomb is located in the interior of the church itself, and its monastery, which opens to the public the beautiful cloisters and the Ancient Apothecary with its products made according to ancient recipes.

The half-day visit to the old town of Modena can be enriched and completed with a visit to an Acetaia, where the Traditional Balsamic Vinegar of Modena PDO is produced.

Traditional Balsamic Vinegar owes its existence to the merge of soil and climatic characteristics of the territory and human knowledge, skills and competencies, which in an admirable synthesis have created an exclusive product distinctive of the present day provinces of Modena and Reggio Emilia, corresponding to the old Duchy of the Este Family.

The origin of this product goes back to the ancient Roman tradition, though the first written records date back to the Middle Ages.

Formerly considered a panacea, a cure-all for any illness and a wholesome balm capable of invigorating delicate stomachs and reviving the appetite, it has won over emperors, kings and dukes. The set of barrels, used for the preparation and aging of Traditional Balsamic Vinegar, was considered important enough to be included in wills and passed down through generations and to be used to enrich young noble women’s dowries. A tradition that still continues, combining the new with the old generations, representing a binding link with the territory and the family.

Visit followed by tasting and opportunity of purchasing local products.

MODENA AND FERRARI: A LAND OF MOTORS

Modena, the birthplace of Enzo Ferrari, is a land of motors. Here, in the heart of the Italian “motorvalley”, the passion for cars has a long tradition and the myth of speed is an integral part of the culture.

Racing and luxury cars, Ferrari, Lamborghini, Maserati, entered into legend bringing the name of Modena all over the world.

Among the many places related to motors, mechanical industries, museums and private collections, we recommend the Ferrari Museum in Maranello, the new Enzo Ferrari Museum in Modena, the Stanguellini Museum, the Museum of cars and motorcycles Umberto Panini, the Righini collection and, in the nearby city of Bologna, Ducati and Lamborghini are a must.

MODENA AND ITS ANCIENT FLAVOURS

Modena is known worldwide for its traditional cuisine, based on the three major excellences of the Emilia Romagna gastronomy: Parmigiano-Reggiano Cheese, Lambrusco of Modena DOP, Traditional Balsamic Vinegar of Modena DOP. The visit to the production companies is a journey through time, in the history and traditions of the rich territory of the province of Modena.

THE SURROUNDINGS OF MODENA

The territory of the province of Modena is rich in treasures that deserve to be discovered: Carpi, jewel of the Renaissance linked to the ancient Lordship of Pio, Nonantola with its Benedictine Abbey, Sassuolo with the Ducal Palace, Spilamberto and the Museo del Balsamico, Castelvetro with its charming village and Castle of Levizzano, Vignola with the Rocca dei Contrari and its cherries, Campogalliano with the Museo della Bilancia, Mirandola, Montale with the Archaeological Park and Terramare Open Air Museum.