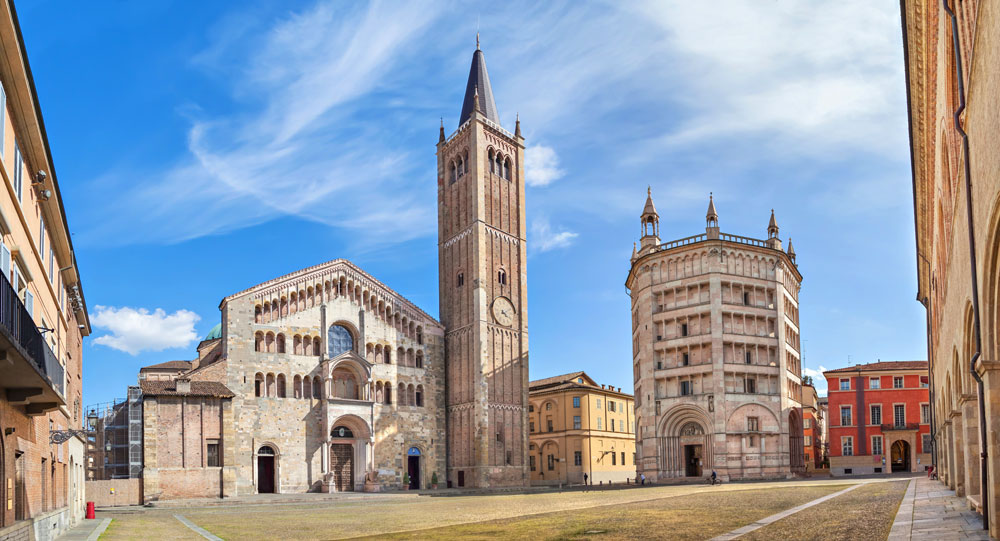 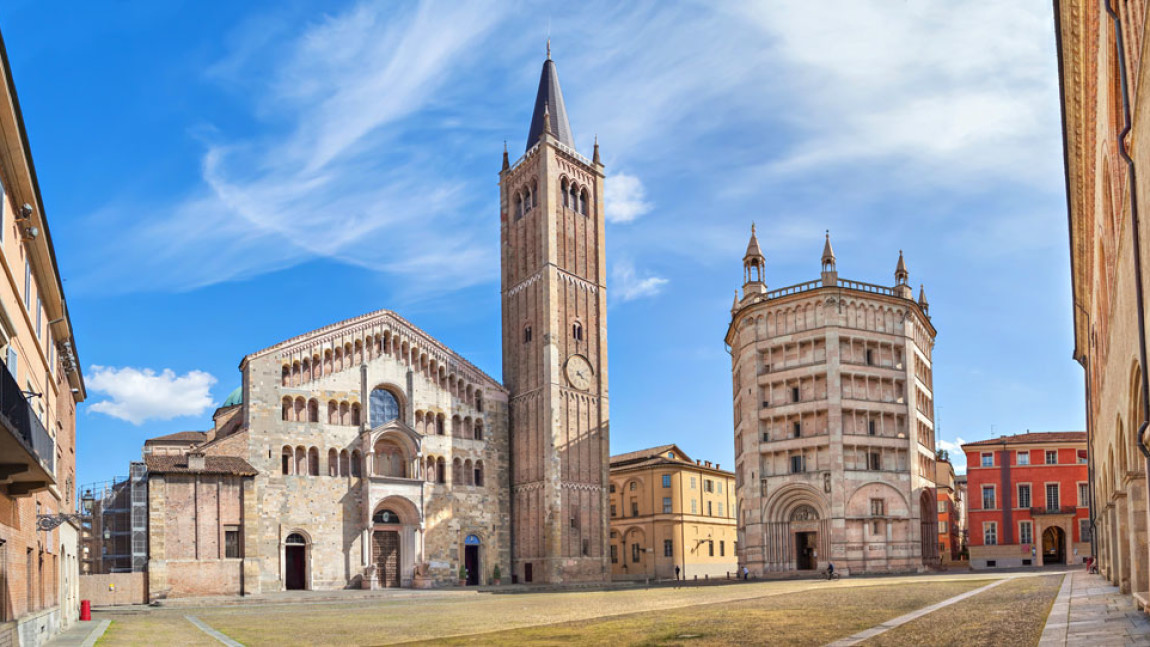 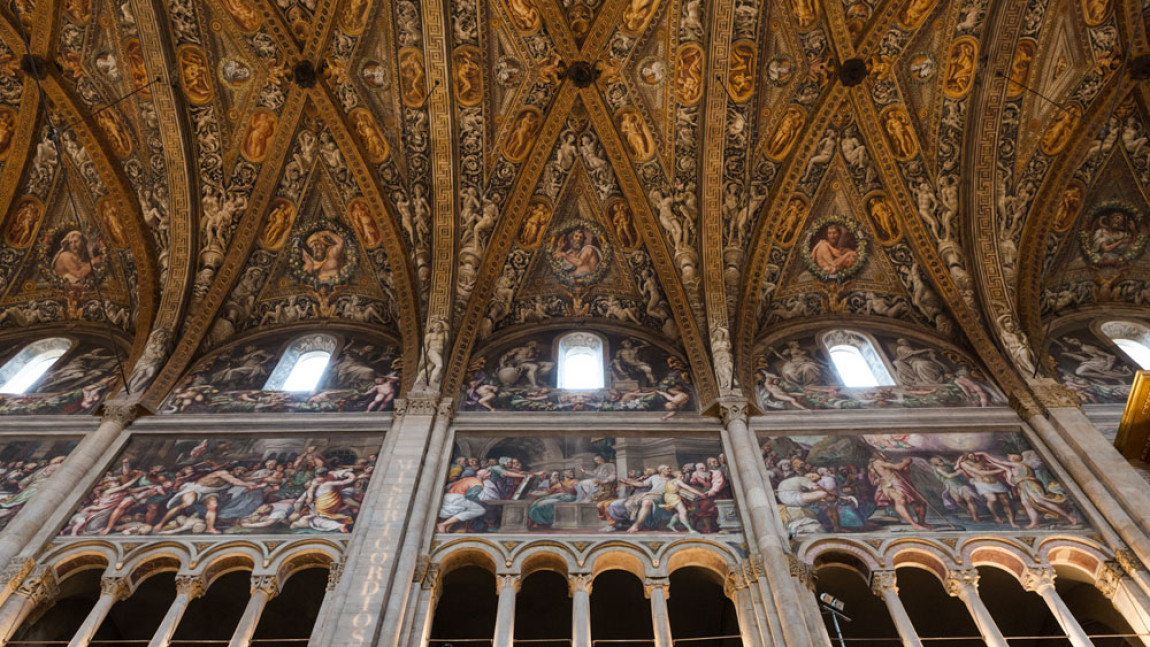 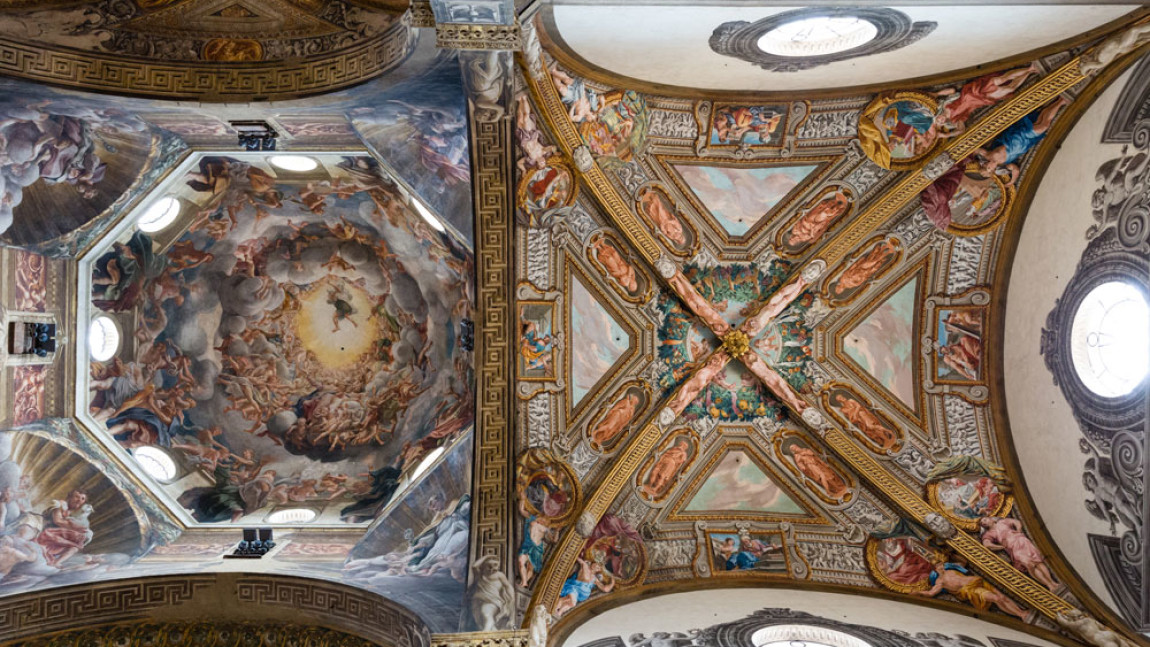 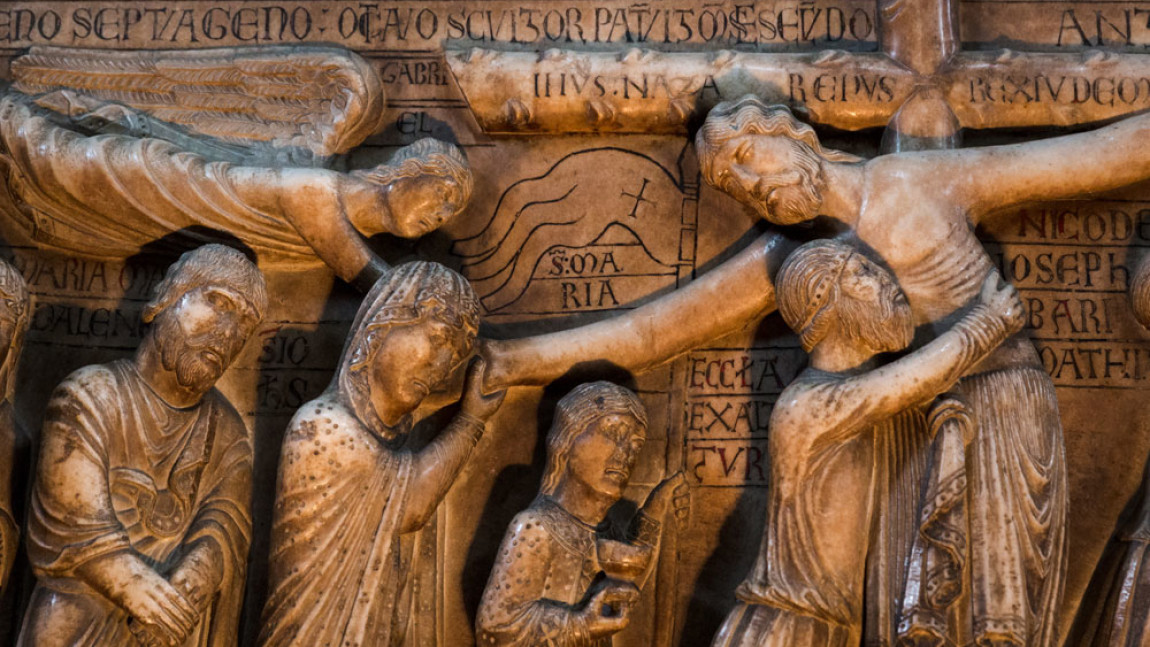 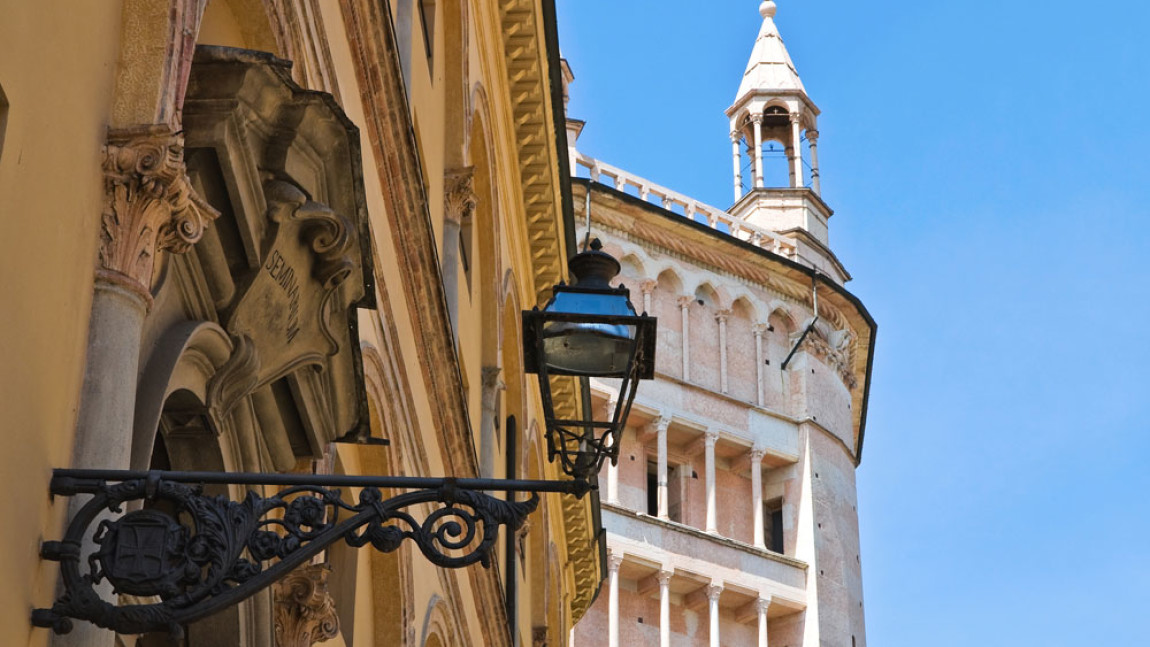 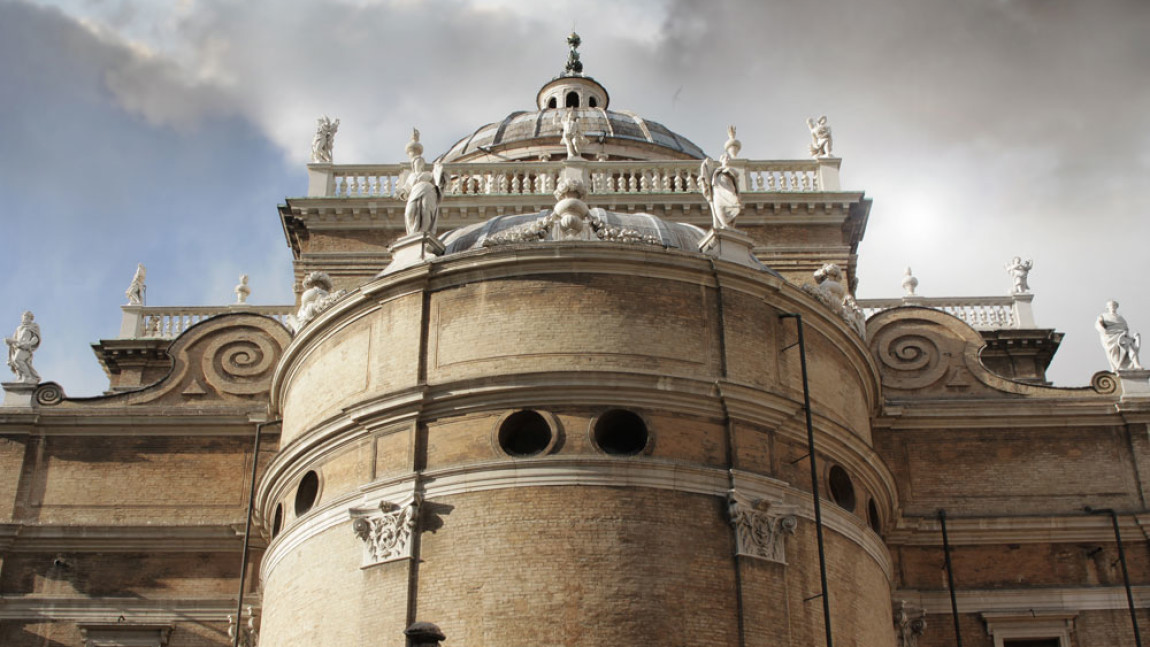 The guided tour of Parma, beautiful town built on the ancient route of the Via Emilia and crucial junction during the Middle Ages, starts with an itinerary into the heart of this elegant capital.

The old town centre of Parma is still livable and it can be pleasantly walked across. It’s hard not to be fascinated by the elegance of its churches, squares and buildings, which evoke its ancient splendour, and the innate passion for food, wine, music and opera which is in the air. There are many surprises that this tour has in store for the curious visitor!

A visit to Parma can not exclude the monumental complex of Piazza Duomo, where the Cathedral, the Baptistery and the Bishop’s Palace create a medieval corner of rare beauty.

The Cathedral, one of the most outstanding Romanesque works of art, houses an important work of Benedetto Antelami: the precious marble slab with the Deposition of Christ from the Cross, now walled in the right transept of the church. The interior is embellished by a great cycle of 16th century frescoes, that culminates in the dome frescoed by Correggio with the Assumption of the Virgin Mary, one of the masterpieces of early Sixteenth Century Italian Painting, from which the new decorative campaign of the church began.

A few steps away, the tour continues with a visit to the Baptistery of Parma, built with precious red Verona marble from 1196 onwards by Benedetto Antelami and his workshop, among the most representative monuments of European art at the moment of transition from the Romanesque to Gothic and symbol of the town of Parma since its construction.

The tour continues with a walk through the historic centre to reach Piazza Garibaldi, also known as Piazza del Comune or Piazza Grande, corresponding in part to the ancient Roman forum chosen later as the seat of municipal power, which still represents the centre of the city life today, overlooked by beautiful buildings such as the Captain’s Palace, the Town Hall and the Governor’s Palace, and also shops, restaurants and cafes which have earned the town the title of “UNESCO Creative City of Gastronomy”.

Nearby, the route takes us to the Church of Santa Maria della Steccata, a splendid example of Renaissance architecture, built to house a miraculous image of the Virgin Mary feeding the child, originally painted on the facade of a small house, which contains valuable works of the parmesan school and the masterpiece of Parmigianino’s maturity.

A few steps away stands the famous Teatro Regio, one of the most important Opera Houses in the world, where internationally renowned artists, such as Paganini, Verdi, Toscanini, Callas and Beniamino Gigli, have played, sung and worked.

The spectacular Teatro Farnese, ephemeral and delicate jewel enclosed in the austere Palazzo della Pilotta, built in the early 17th century at the bidding of the Farnese family as impressive headquarters of the court services, is among the most important monuments of the town together with the Palazzo Ducale and its garden, just across the river, place of delights and leisure reserved to the court.

With more time available Parma still has in store many surprises!

You may be fascinated by the Church and the Monastery of St. John the Evangelist, with its cloisters, the Library and the Old Apothecary, places where you still breathe an intense spirituality, or crossing a monumental gate a few steps from the very crowded Cavour Street stumble into the evocative space of the famous Abbess’ Room, the first work by Correggio in Parma, a masterpiece of illusionism and the rivisiting of mythology and classical antiquity, the meaning of which is still in part elusive.

A visit to the Museo Glauco Lombardi is recommended to visitors interested in the 19th century and napoleonic history, but also to the merely curious because of the richness and preciousness of documents and memorabilia related to the figure of Marie Louise of Austria which are exposed in the Museum.

For art lovers, the tour continues with a visit to the National Gallery of Parma, to admire the masterpieces of the great masters of Parma (Correggio and Parmigianino), the works of the Academy of Fine Arts and the famous portrait of Marie Louise in the guise of the Greek Goddes of the Concord made by Antonio Canova, the works of the Antelami’s workshop, the medieval Tuscan altarpieces bought by the Bourbons in the late 18th Century, the works of the Bolognese and Venetian artists, such as Francia and Cima da Conegliano, arrived in Parma in the early 16th Century, and Leonardo da Vinci’s famous “La Scapigliata” . The North wing of the National Gallery, corresponding to the premises of the old barns of the palace, restored in the early ’90s and characterized by fascinating scaffolding designed by Guido Canali, houses the works of artists of the 16th Century Parma such as Gerolamo Mazzola Bedoli and Jacopo Bertoja and masterpieces by Carracci, Bartolomeo Schedoni, Lanfranco, Ricci, Tiepolo, Piazzetta and Canaletto.

There are numerous other tours to be taken in Parma. To the archeology lovers and history enthusiasts we recommend a visit the National Archaeological Museum, formerly Ducal Museum of Antiquities, established in 1760 to house the findings from the excavations carried out on the Roman site of Veleia (where the famous Tabula Alimentaria, dating from the Trajan era, one of the largest bronze inscriptions of Roman antiquity, was found). The Palatine Library, created in the early sixties of the 18th century, is fascinating too: it preserves its original neoclassical furniture and precious manuscripts and printed material, the organization of which was entrusted to erudite teatine monk from Turin Paolo Maria Paciaudi, who divided it into six main classes of subjects and used a new and innovative cataloguing method with movable cards. The Bodoni Museum, housed in the premises of the ancient Ducal Printing House conducted by the famous typographer Giambattista Bodoni since 1768, should not be missed.