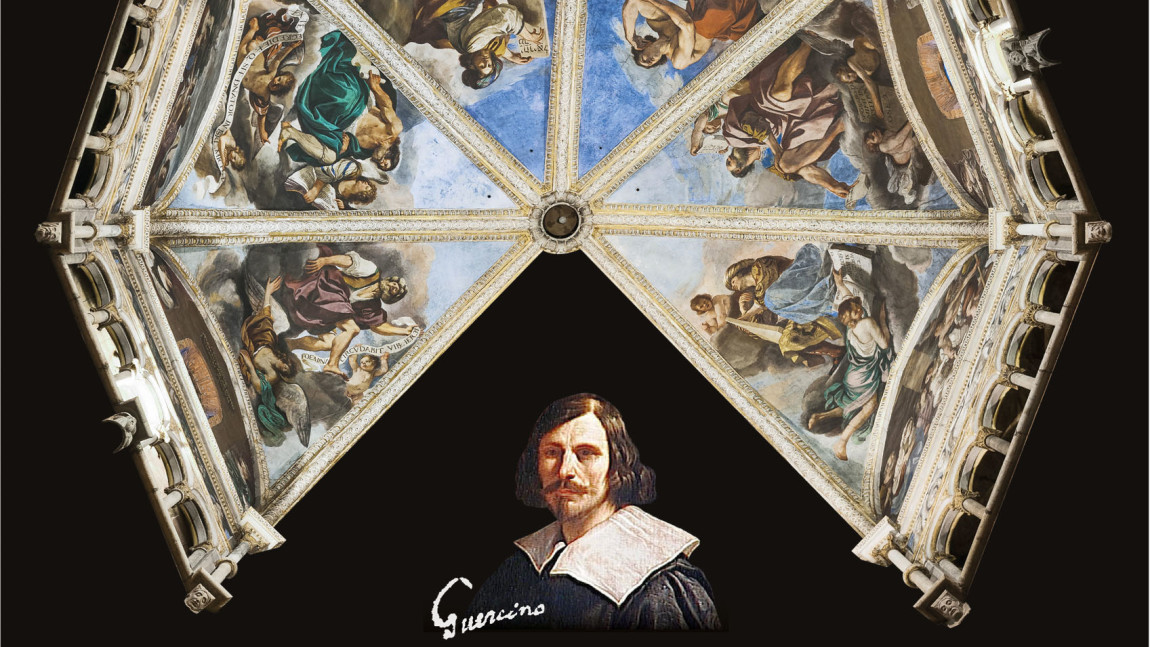 A major event will celebrate the memory of this seventeenth-century artist, a native of the region: an exhibition at Palazzo Farnese and the unique experience of climbing inside the dome of Piacenza Cathedral to admire Guercino’s frescos.

Artemilia takes this opportunity to propose a special tour specifically dedicated to Guercino, on the trail of the great painter, who in 1626 was called to Piacenza to finish the decoration of the grand dome of the Cathedral and who also worked in the city for the Grey-friars in the Shrine of Our Lady of the Countryside, where Pordenone had worked as well.

In Piacenza, 2017 will be remembered as the year of Guercino.

From 4 March to 4 June, the seventeenth-century artist from Emilia Giovanni Francesco Barbieri nicknamed Guercino (Cento, Ferrara, 1591 – Bologna, 1666), who left much important evidence of his work in Piacenza, will be celebrated with a series of highly evocative initiatives of substantial historical and artistic relevance, uniting the Cathedral and Palazzo Farnese in a single visitor experience that takes in both the sacred and the secular.

The nerve-centre of the entire event will be the Cathedral, the dome of which is home to the breathtaking cycle of frescos painted by Guercino in 1626-1627 and now visible in all its beauty with a new lighting system designed by Davide Groppi.

One quite exceptional feature of this event, possible throughout the two months, is that visitors will have the almost unique and once-in-a-lifetime opportunity to climb up inside the dome of Piacenza Cathedral, to get a close-up view and admire the six panels frescoed with images of the prophets Haggai, Hosea, Zechariah, Ezekiel, Micah and Jeremiah, the lunettes depicting episodes from the infancy of Jesus – the Annunciation to the Shepherds, the Adoration of the Shepherds, the Presentation at the Temple and the Flight into Egypt – to eight enchanting Sibyls and the frieze of the tambour.

The public’s visit will start in a multimedia room, where visitors will find an innovative way of interpreting Guercino’s masterpiece and of taking part in an unprecedented full-immersion experience using special 3D visors.

At the same time, the Ducal Chapel in the Palazzo Farnese will host an exhibition, curated by Daniele Benati and Antonella Gigli together with an academic committee comprising Antonio Paolucci, Fausto Gozzi and David Stone, presenting a selection of 20 further masterpieces by Guercino that together constitute a good representation of the long parable of his career, which saw him rise to the status of one of the internationally most popular Italian artists of the seventeenth century.

“GUERCINO IN PIACENZA” HALF DAY TOUR – visit to the exhibition in the Palazzo Farnese and the cathedral.

“GUERCINO IN PIACENZA” FULL DAY TOUR – visit to the exhibition in the Palazzo Farnese, the cathedral and the town of Piacenza on the trail of Guercino.

For information  and reservations contact us : + 39 348 4559176 Email: artemilia@guide-parma.it Email: guideparma@gmail.com

It is necessary to book date and time of the visit to the Cathedral dome in advance and respect visiting time.

Piacenza Cathedral dome visit is allowed to 20 people each 15 minutes, with custodial staff.

“Guercino in Piacenza” exhibition visit is only allowed to groups of maximum 25 people.

The ascent to the Dome of the Cathedral is through some ancient existing paths, created only for maintenance reasons alongside with new ones created in the attic. Some ways might cause a difficult walking. Therefore, visitors are required to respect some security guidelines.