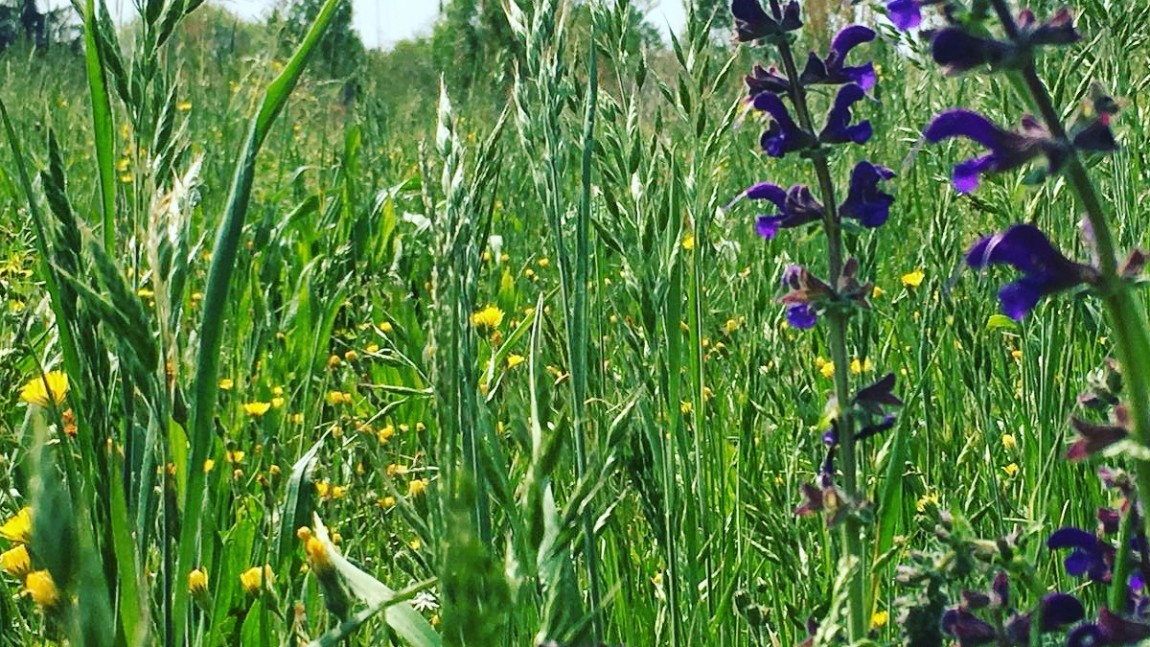 It was probably only in the 1600s that permanent meadows began to be distinguished from temporary meadows, that is, when in the Emilia countryside, the pratense clover and the alfalfa started to be cultivated. Permanent meadows, dating back to the first reclaimed land, were made up of different species of spontaneously born herbs, while the temporary meadows  were the meadows that were sown on specially prepared land and entered the crop rotation system.

The meadows were of course planted only where it was possible to irrigate, using very carefully the water that the canals, springs or artesian wells could offer.  The stranger who traveled along the Via Emilia in past centuries was struck by the countless perfectly leveled meadows he encountered on his way. The Emilian farmers were in fact very skilled in carrying out the leveling operations of the meadows, functional to the maximum use of the few quantities of water available.

The polyphyte meadows were said to be permanent – or stable – since once planted they were never “broken”, especially those located in the immediate vicinity of the farmhouses, called “pre da ca” in jargon, very useful and convenient for supplying grass on rainy days.

Permanent meadows, precisely because they are not plowed, still present a great variety of herbs and essences, thanks to the spontaneous propagation of the species. This is the reason why they are called polyphyte. The fodder coming from the mowings of polyphytes permanent meadows is an excellent food for the feeding of cows and confers characteristics and distinctive aromas and flavors to Parmigiano Reggiano.

Permanent meadows also contribute to the enrichment of soils in organic matter and to the containment of carbon dioxide emissions in the air.  This is the central theme of the three-year Prati-Co project launched in November 2016, financed by Measure 16 of the 2014-2020 Emilia Romagna rural development program, coordinated by I.Ter cooperative company, a Bolognese company active in the study of soils, and  having as partners the Crpa of Reggio Emilia, the Bibbiano “La Culla” Consortium and five companies involved in the production of Parmigiano Reggiano from the Bibbiano (Reggio Emilia) territory and surroundings.

“Breaking” a meadow, in rural jargon, means eliminating a crop to make room for something else.  Today we know that agricultural biomass has a very important ecological function in limiting the excess of carbon dioxide in the atmosphere, one of the main causes of the “greenhouse effect”.  Thanks to photosynthesis, plants grow and transform the carbon of the atmosphere – derived from carbon dioxide – into roots, stems, flowers. Furthermore through photosynthesis, part of the carbon is immobilized for a very long time in organic matter in the soil.  It should be underlined that this process is maximum during the growth of plants.

The permanent meadows, which are not broken but simply mowed 4 or 5 times in a year, are constantly growing.  Recent soil analyzes have shown that permanent  meadows are capable of fixing around 180 tons of carbon per hectare in the first 50 centimeters of soil.  This quantity corresponds to 25% more than the quantity of carbon per hectare fixed by an arable land, such as a field of alfalfa.  In the ground, in fact, permanent meadows store carbon, in the form of organic matter, by subtracting it from the atmosphere.

Moreover, the permanent meadows, thanks to the continuity of the presence of a vegetable cover, are able to minimize the percolation of nitrates towards the water table, thanks to the rate of absorption which slowly takes place throughout the growing season.  Nitrates are a soluble form of nitrogen, a fundamental element in plant nutrition, but their solubility can determine water degradation, contributing to the growth of aquatic plant organisms such as algae and represent a toxicity factor for animals and humans.  For this last reason, a nitrate limit has been set for drinking water, equal to 50 mg / l, and the so-called “nitrate vulnerable areas” have been identified, for which limitations are placed regarding the use of slurry and manure.  In the Po Valley the livestock load per hectare is very high and permanent meadows end up performing a very important environmental function, that of safeguarding the quality of groundwater.

UNFORTUNATELY, PERMANENT MEADOWS ARE NOT YET PROTECTED AS A COLLECTIVE HERITAGE

Unfortunately, permanent meadows are not yet protected as a collective heritage. Greater incentives are needed to maintain them, in parallel with the spread of efficient irrigation systems. It happens more and more often today that we witness the “breaking” of permanent meadows in favor of other crops or concreting.  The fluctuation in the prices of agricultural products implies that permanent meadows are abandoned in favor of more profitable cereal crops, alfalfa or industrial crops such as tomatoes.

What is lost every time a permanent meadow is “broken”?  In agronomic terms, high quality forage is lost.  In environmental terms, we release carbon dioxide into the atmosphere.  By plowing one hectare of permanent meadow, as much carbon dioxide is released into the atmosphere as a medium-sized car that travels two million kilometers! We also lose the ability to protect groundwater from nitrate infiltration. We reduce biodiversity and the protection of the ecosystem and finally lose an element that has characterized our landscape for centuries.

So, “let’s not break them”, because they have an exceptional value: as demonstrated by the “forage4climate” project, funded for four years by the European Union as part of the Life + Climate Change Mitigation project (Life15 CCM / IT / 000039), started in September 2016, climate change can be mitigated by forage systems, thanks to lower greenhouse gas emissions and greater carbon storage in the soil.

The polyphyte permanent meadows of the provinces of Parma and Reggio Emilia play an important role in the environmental sustainability of the production of Parmigiano Reggiano, come and discover them with Artemilia!