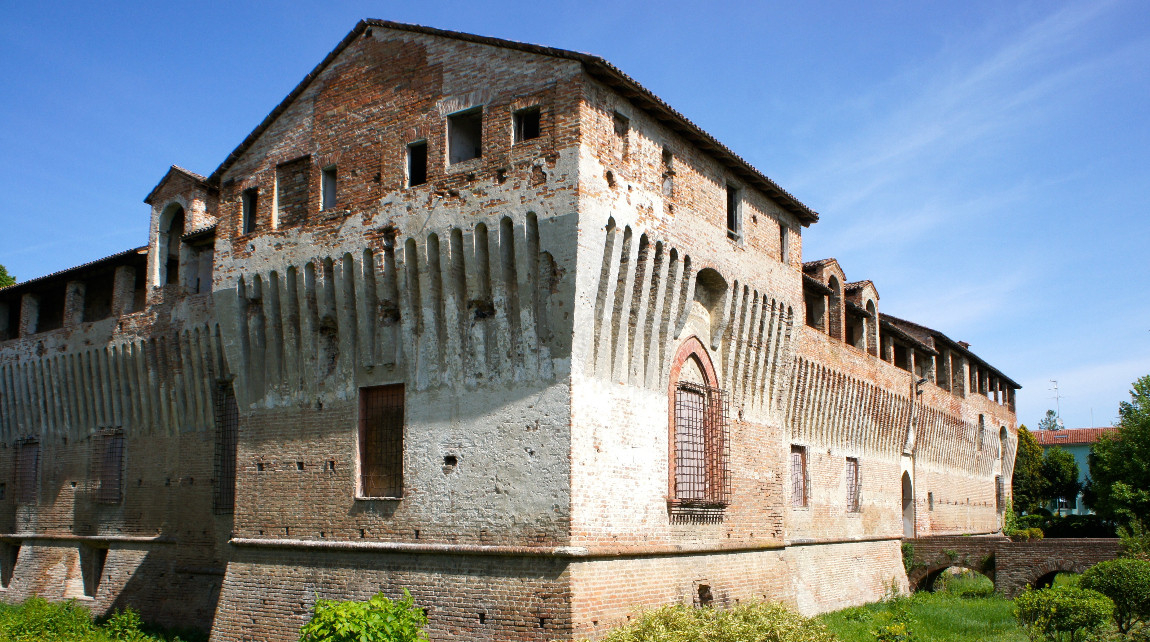 Today we lead you to the discovery of Roccabianca castle.

You won’t stumble upon Roccabianca castle by chance, you won’t find it along the main road moving from one small town to another. It doesn’t stand out majestically on a spur of rock and it can’t be seen from afar, hidden as it is behind the thick row of lime trees that form the very long avenue clearly visible from the provincial road that goes from Parma to Cremona. But if you wish to leave the main road for a moment and immerse yourself in the Parma lowlands, the Roccabianca castle will surely surprise you.

Arriving in the central square, Piazza Minozzi, your attention is captured by the particular shape of the arcades arranged in a horseshoe shape. Until a few decades ago they housed the main shops of the town: the grocery store where you could find a little bit of everything and the pharmacy with the small white and blue painted albarelli that showed off on the wooden shelves. In ancient times this space was occupied by the stables of the castle or “Rocca” – as the building is still called by the inhabitants of Roccabianca – erected in the second half of the Fifteenth Century at the behest of one of the most powerful feudal lords in the area, Pier Maria Rossi called the Magnificent.

Passing through the ravelin entrance we enter the courtyard via a masonry bridge, which was certainly a drawbridge in the past. Looking upwards while walking you can still clearly see the housings of the bolzoni that were used to raise the wooden bridge. In a slightly decentralized position, in the courtyard, the keep, the main watchtower, has stood mighty for over five hundred years and served as a last refuge in case of siege.  Its shape with overlapping bodies, a sort of double tower consisting of volumes of decreasing size, recalls the Filarete tower, which Pier Maria Rossi had certainly admired at the Castello Sforzesco during his numerous stays in Milan.

Come to visit the Roccabianca castle in autumn, if possible, when the American vine that covers the walls of the courtyard lights up with numerous varieties of red, from the darkest to the brightest, filling the eyes of those who decide to discover what hides behind the mighty castle walls with unexpected joy.

Turning to the left, your gaze encounters a beautiful portico with columns and frescoes, which have been rediscovered a few years ago. They have long been hidden by a heavy lime layer spread in the seventeenth century to disinfect the rooms upon arrival of one of the numerous plague epidemics.  The recovered frescoes show mottos that praise love and patience.  As a symbol of patience we find the wild medlar (Mespilus germanica) which has the characteristic of being the last of all fruits which ripes only in late autumn.

The relationship between the founder of the castle and the noblewoman Bianca Pellegrini from Como, wife of Melchiorre d’Arluno, had a great influence on Pier Maria Rossi’s artistic commission both in Roccabianca and in other places of the Rossian fiefdom, inspiring some of the most outstanding pictorial cycles of the Italian Fifteenth Century. The decorations of the Roccabianca castle constantly refer to the love between the lord of the manor and the noble mistress, to whom the castle was finally bequeathed, as revealed by the will of 1464 and by a notarial deed drafted 3 years later.

Till this day, many wonder if the name of Roccabianca (white castle) which made its appearance in documents after the Mid-Fifteenth Century replacing the ancient name of Rezinoldo or Arzenoldo (high bank), has to be considered as a tribute to the beautiful Milanese rather than to the color of the plaster that once covered the exterior of the castle.

IT’S TIME TO TAKE A LOOK INSIDE…

After the portico, passing through a small door located in the south-eastern corner we enter the tower which encloses the suggestive “camera picta”.  The frescoes on the walls tell the story of the humble but virtuous peasant Griselda subjected by the husband to fiery trials to test her loyalty and patience, an example of the obedience due to the lord by his vassal and probable warning to be patient addressed by Pier Maria Rossi to the beloved Bianca Pellegrini.

Through a bare vestibule – probably the ancient entrance to the manor –  we pass into a room decorated in more recent times, between the end of the 16th and the beginning of the 17th Century, when the Roccabianca castle passed to the Rangoni family of Modena, as revealed by the stucco shells of the vault.  The frescoes in this room are the last great discovery of the castle.  Until 2002 they were in fact covered with plaster laid in the 1900s.

If you are used to climbing the towers, venture up the stairs of the keep, to the top, to admire the landscape at 360 degrees. If it is a beautiful and particularly clear day, you may even be able to see the Torrazzo of Cremona!

To reward your effort at the end of the  climb, you may enjoy a small taste of grappa or liqueur, kindly offered by the castle property.  Nocino, Bargnolino, Sburlon, Erba Luigia, typical liqueurs made with herbs, nuts and local fruits, but also grappas and fine brandies aged in the cellars of the fortress.

The Roccabianca castle, now privately owned, was purchased in 1968 by Cav.  Mario Scaltriti,  who identified it as a suitable place for the aging of the spirits produced by the Faled company and decided, later, to promote its restoration and opening to the public, which took place in spring 2003.

We are waiting for you, as soon as we will return to travel, to discover the treasures of the Parma lowlands without haste and savor their gastronomic delicacies, following the slow rhythm of the Great River.