HomeAll postsNewsJourney to the land of Matilda of Canossa

Journey to the land of Matilda of Canossa 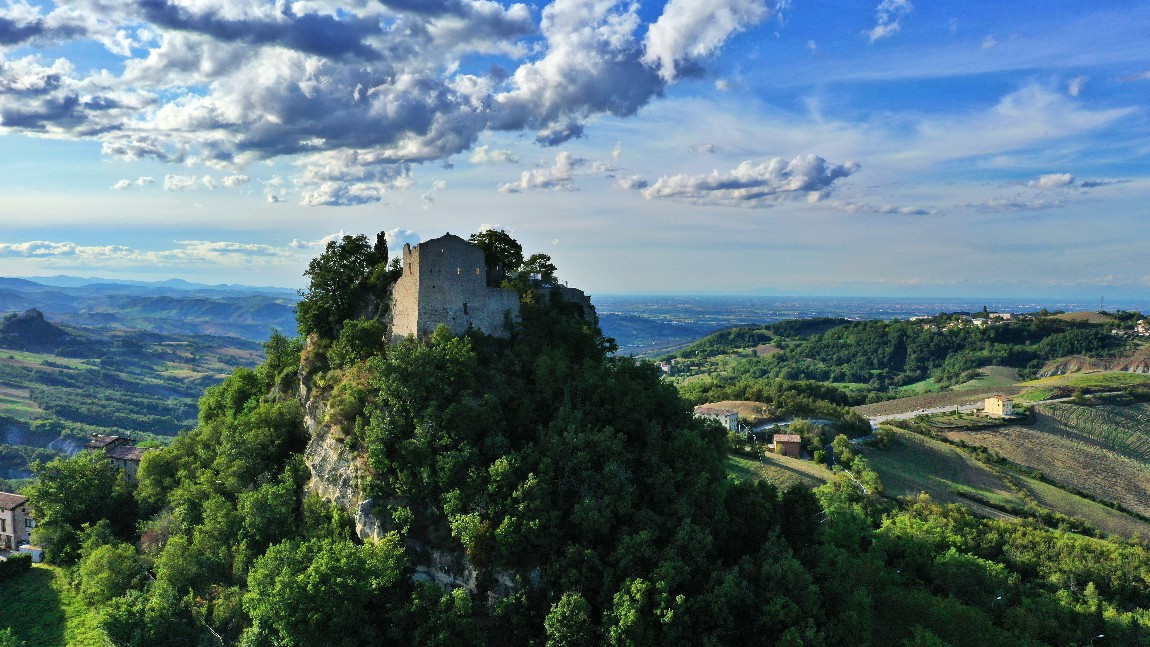 JOURNEY TO THE LAND OF MATILDA OF CANOSSA

On the first Sunday of May, on the hills of Quattro Castella, between Bergonzano and Sedignano, along the road leading to the castle of Canossa, we celebrate the Festival of the Madonna della Battaglia, by the small sanctuary built in memory of the victory by the forces of Matilda of Canossa against those of the Holy Roman Emperor Henry IV.

This year, due to the restrictions aimed to contain the spread of Covid-19, we will not be able to participate in the festival and attend the performance of the flag bearers and musicians “Majesty of the Battle”.  We will not be able to visit the church and venture on an excursion to discover the places of Matilda of Canossa but, while waiting to be able to do so in person, we can travel with our imagination.

The Battle of the Mist was an important clash between the army of the Holy Roman Emperor Henry IV and that of Matilda of Canossa, fought on Mount Giumigna (Sedignano).  The battle took place in October 1092 due to Henry IV’s attempt to conquer the fortress of Canossa.  It was an important battle, which changed the course of history, in the context of the “Investiture Controversy” which pitted the Papacy against the Empire during the 11th and 12th centuries.  After that defeat, Emperor Henry IV abdicated in favor of his son Henry V, who in 1111 crowned Matilde of Canossa as Imperial Vicar of Italy at the Castle of Bianello.

The Battle of the Mist, however, is not just an event reported by the sources. The battle has become folk heritage of the people of Quattro Castella over the centuries, a memory handed down through generations, arising superstitions and becoming part of local folklore.

THE BATTLE OF THE MIST

Donizone from Canossa, Matilda’s faithful biographer, is our only source regarding the famous battle.  He is a precise source,  who is familiar with the places and names them and describes the movements, probably an eyewitness to the events.  In his work entitled “Vita Mathildis” Donizone reports that Henry IV, seeing the clear day, turned towards San Polo, pretending to head towards Parma, convinced that he could take the fortress of Canossa by surprise.  The humiliation suffered in 1077, when he went to penance in Canossa to meet Pope Gregory VII and obtain the withdrawal of the excommunication (he remained for three days, from 25th to 27th January, waiting in front of the castle entrance and only on January 28th, thanks to Matilda’s mediation, the Pope decided to revoke the excommunication).  The emperor thought that perhaps the time for revenge had finally come.

Henry IV had probably been told that the Countess was not in Canossa and that the castle was poorly garnished and due to this he attempted the assault, choosing not the Borsea road, the ridge road that would have made him lose the surprise effect,  but the road of Caverzano which, embedded in the bottom of the valley, would have allowed the soldiers to proceed for a long time hidden, since the road acoustically reverberates towards the plain.

While Henry IV tried the sortie, however, as Donizone tells, Matilda promptly gathered her militias in Canossa and as soon as she knew that Henry IV was marching towards San Polo, she left her husband Guelfo and a part of the forces to guard the fortress, while with the other she moved towards the Castle of Bianello.  When Matilda arrived with her armies, in tight columns, on Mount Giumigna, the enemy had already reached Mount Lintergnano.  Both sides were surprised by the mutual proximity, so the Countess’s militias fled into the castle of Bianello whilst the imperial ones advanced towards Canossa. Understanding the enemy’s intention, Matilda urged her captains to take up arms and repel Henry IV’s assault.  The captains immediately left Bianello with their respective militias to reinforce the Canossa garrison.  In rushing to the fortress, though provoked by the imperial contingents, they avoided fighting and managed to reunite with the bulk of the garrison.When the trumpets of Henry IV announced the assault, the abbot Giovanni with the monks were chanting invoking all the saints to protect the fortress of Canossa, but suddenly there was a dense fog spread in the air.

The militias of the Countess, who knew the area well, fought bravely and, while the enemy was targeted by more and more arrows, only one Canossian fell in battle.  Finally, the imperial banner was torn. It was carried in triumph to the temple of Sant’Apollonio, inside the castle of Canossa. The loss of that banner, as Donizone says, marked the beginning of the decline of Emperor Henry IV. From this defeat the nickname “Perdicause” (Lost causes) would have taken on consistency.

On account of the plummeting events, the German soldiers decided to take refuge in the Henry IV district, located on a nearby mound.  During the retreat, Matildic troops inflicted another hard lesson on the German militias, right where the Madonna della Battaglia is now situated.  Henry IV’s troops, who did not know the places, found themselves blocked by Matilda’s army and by the lack of visibility caused by the sudden rising of the fog.  The emperor could only decide to retreat and, after spending the night in Bibbiano, he hurried to reach the river Po, which he passed the following morning.

The imperial army was taken into force in the valley and forced to retreat, but it was not just a simple defeat, Henry IV understood that the war was lost.  The emperor realized the impossibility of penetrating those harsh territories, very different from the Po Valley and Saxony, made of steep paths, badlands, inaccessible places protected by turreted fortresses and tower houses from which the inhabitants unloaded darts of all kinds, spears, arrows, javelins, boulders, fiery spades on anyone who approached.

The “nebulam grandem” of which Donizone speaks about should perhaps be understood not so much as fog but rather as the formation of low clouds, which were then trapped between the deep hills and the badlands, a phenomenon widespread in the Quattro Castella area until a few tens of years ago.

THE ORATORY OF THE MADONNA DELLA BATTAGLIA

From the Battle of the Mist, as the clash was nicknamed, the suggestive Church of the Madonna della Battaglia (Virgin of the Battle) takes its name, located a few hundred meters from the hills which were the place of combat. By Matildic will, a statue dedicated to the Blessed Virgin was erected at the battle site.  After Matilda of Canossa’s death, the church was erected but, destroyed by time and subsequent battles (1233 and 1557), it was largely rebuilt in 1724. The small church of the Madonna della Battaglia is the only Marian sanctuary in the parish of Quattro Castella and on 13th May the church is the scene of a great celebration in honor of the Virgin Mary. Once, a procession started from the village, crossed the internal paths of the four hills reciting the Rosary, reached the sanctuary and after the Mass it proceeded down the main road.  There are still numerous pilgrims who, alone or in groups, reach the Madonna della Battaglia on Sunday during the summer.

The image of the Virgin Mary, painted in fresco in the center of the apse basin, welcomes those who enter the sanctuary.  The Madonna is represented in the foreground in an open space: wrapped in a large blue mantle she sits on two steps with the Child on her lap, while two armies collide behind her.  There are two different traditions inherent in the fresco, which however are not reflected in Donizone’s story.  According to the first, during the epic battle between Henry IV and Matilda’s troops, the Madonna appeared in the vicinity of the church, separating the two contending armies.  According to a different local tradition, the Madonna would have sent the fog that would have enveloped Henry IV’s troops, disorientating them.  The overlap of two intense devotions, the one towards the sanctuary and the other towards Matilda of Canossa determined that with the passing of time among the people of Quattro Castella a new idea spread, the idea that the Virgin had intervened during the famous battle as  mother who divides the quarrels or as protector of Matilda of Canossa and of the Church against the evil represented by the excommunicated emperor Henry IV.

We are waiting for you, as soon as it will be possible to go outdoors again, to immerse ourselves in nature and in the evocative atmosphere of medieval churches, castles and  villages, to discover the places of Matilda of Canossa and the Apennines!