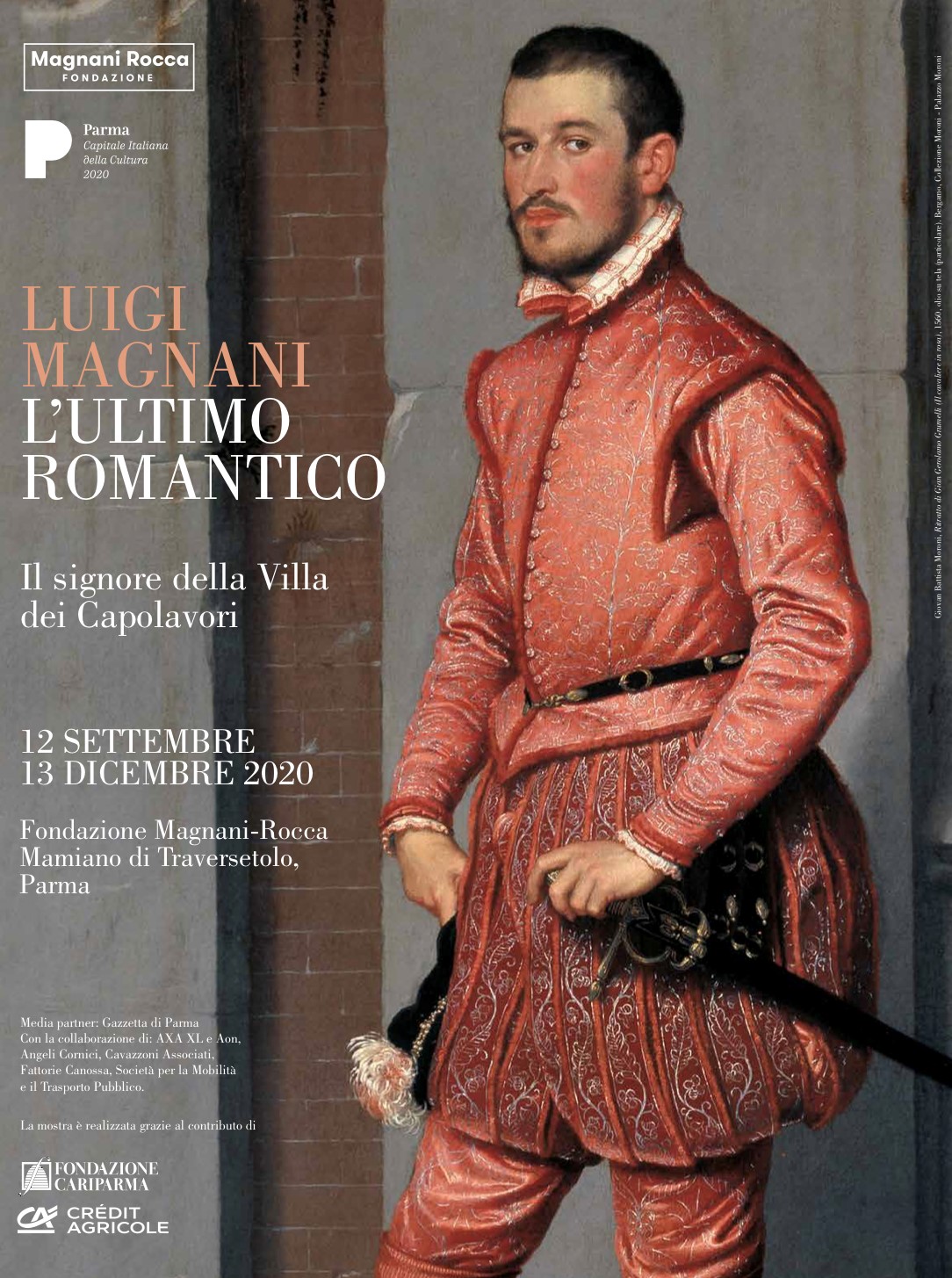 In the countryside south of Parma, along the Pedemontana road that leads from Quattro Castella to Torrechiara and Felino, in a gentle balance between the plain and the sloping hills of the Apennines, lies the ancient Corte di Mamiano, now home to the Magnani Rocca Foundation.

The complex, immersed in the quiet of the Emilian countryside, made up of meadows tended like gardens, which provide hay for the production of Parmigiano Reggiano, small roads that were once white, ditches, rows, villas and farmhouses, corresponds to the properties of the Zilieri-Dal Verme counts which were bought by the Magnani family in 1941.

The Corte di Mamiano is the place where the last owner, Luigi Magnani, art critic, essayist, composer and musicologist, retired to live in 1976, after having abandoned teaching at the University of Rome in search of the quiet and secluded life he desired. In this place, Luigi Magnani decided to create an artistic foundation to which he could entrust his collection of works of art.

The permanent collection of the Magnani Rocca Foundation is set up inside the rooms of the villa where Luigi Magnani lived and hosted artists, critics, writers such as De Chirico, Guttuso, Argan, Zeri and Montale. The position of the furnishings has been left quite unchanged to preserve the atmosphere of a lived-in home that can still be appreciated today by walking pleasantly among precious Empire-style furniture and objects, such as the large malachite bowl by Thomire, a gift from Tsar Alexander I to Napoleon, and furniture by Jacob.

Luigi Magnani, son of Giuseppe, an agricultural entrepreneur who owned a company dedicated to dairy products, and Eugenia Rocca, coming from a noble Ligurian family, was educated as a child to love music, literature and the visual arts. A leading intellectual in the Italian culture of the early twentieth century, a frequenter of the most exclusive salons of his time, he engaged all his energy and economic resource in the search for beauty and in the purchase of unique paintings and furnishings, which gradually came to animate the rooms of the Villa of Mamiano, in a sort of process of spiritual identification of the collector with the works themselves: Filippo Lippi, Gentile Da Fabriano, Dürer, Tiziano, Rubens, Van Dyck, Goya, Tiepolo, Canova, Füssli, Monet, Renoir, Cezanne, De Chirico, Severini, Carrà, Guttuso, Burri, Morandi. A real pantheon of great artists of all ages, built through personal and never banal choices. The works were reported by friends, critics and artists and, once purchased, they were shown in rare cases and only to closest friends.

Well before his death, Luigi Magnani arranged the result of such an effort and passion to be part of a Foundation, with the intention of devoting its treasures for the enjoyment of all, in the memory of his parents. Since April 1990, the Villa dei Capolavori has been open to the public in the period from March to December and his works continue to arouse deep emotions, an expression of man’s amazement in the face of the secret of beauty.

In addition to the permanent collection, the Foundation hosts two exhibitions a year. The next exhibition scheduled “The Last Romantic” was conceived as a very rich tribute to its founder. An opportunity not to be missed to learn more about the figure of Luigi Magnani, the life, interests, friendships of the famous essayist, art critic and musicologist who so loved the dialogue between painting, music and literature, through over one hundred magnificent works from famous museums and prestigious collections.

Just take a few steps in the Italian gardens and in the romantic park, rich in centuries-old exotic and homegrown essences, which together with the large lawn surround the villa, occupying an area of ​​over 12 hectares, to be immediately absorbed by silence and peace. The tranquility of nature is interrupted only by the peacocks, who can’t wait to show off their colorful feathers in spring and summer. Once you climb the stairs leading to the entrance, you are enveloped by an old-time atmosphere. It is the beginning of a journey through eras, subjects, styles and a kaleidoscope of emotions so tight that it almost leaves you breathless.

On the ground floor you can visit the first part of the collection with a young Tiziano, an extraordinary and melancholy Goya and the famous Beato Angelico. The famous Terpsichore by Canova shows itself in all its shameless beauty among the refined early nineteenth century furnishings. But you have to reach the first floor to learn more about the landlord’s tastes. After the Impressionists, the paintings of De Pisis, Carra and Burri you meet two rooms entirely dedicated to Giorgio Morandi. The long, even if not talkative, friendship between Luigi Magnani and Giorgio Morandi was fundamental in the history of the collection. Thanks to this friendship, the Villa of Mamiano now houses the largest collection of oils, watercolors, etchings and drawings by Giorgio Morandi after the museum dedicated to him in Bologna.

Luigi Magnani and Giorgio Morandi met thanks to Cesare Brandi in Salsomaggiore Terme in the province of Parma in 1940. Morandi used to visit the Magnani Family during Easter and Christmas seasons, on which occasions he would bring a canvas as a gift to Luigi Magnani and would receive in return the dairy products produced by the Magnani family. In addition to their love for art and painting, Magnani and Morandi shared an appreciation for Cezanne’s work, as shown by the watercolors in the permanent collection and the pages of “Il mio Morandi”, written by Luigi Magnani in 1982 by collecting the correspondence with the artist from 1942 to 1964.

From Magnani’s words we learn that Morandi did not tolerate his works being sold and never painted on commission. One of his rare works made on request was “Musical Instruments”, the canvas commissioned by Luigi Magnani to his friend in 1941, which still today is on display in one of the rooms of the Magnani Rocca Foundation. What makes the visit more exceptional is the presence of one of the very few surviving self-portraits of Morandi, painted in 1925.

“The Last Romantic”, the new monographic exhibition dedicated to Luigi Magnani at the Magnani Rocca Foundation certainly reserves many other surprises. Paintings, portraits, self-portraits and autographed documents of the celebrities of the twentieth century are presented together with pictorial tributes to Magnani’s passion for music, with works by the greatest Italian artists of the twentieth century, from Severini to de Chirico, from Guttuso to Pistoletto, exhibited together with valuable ancient musical instruments. In addition, visitors can experience Magnani’s dreams of other ‘absolute masterpieces’, that he pursued but never acquired, which will be revealed at the Villa dei Capolavori for this exhibition. The first of these is the renowned painting “Il cavaliere in rosa” (The Man in Pink) by Giovanni Battista Moroni, a sixteenth-century gem of the Palazzo Moroni in Bergamo, which, having been on display at the Frick Collection in New York, will be exhibited at the Magnani Rocca Foundation for the duration of the exhibition. All that remains is to visit it.

Contact us to book your guided tour to “The last Romantic” exhibition and the permanent collection!