The Bianello Castle and Lipu Oasis 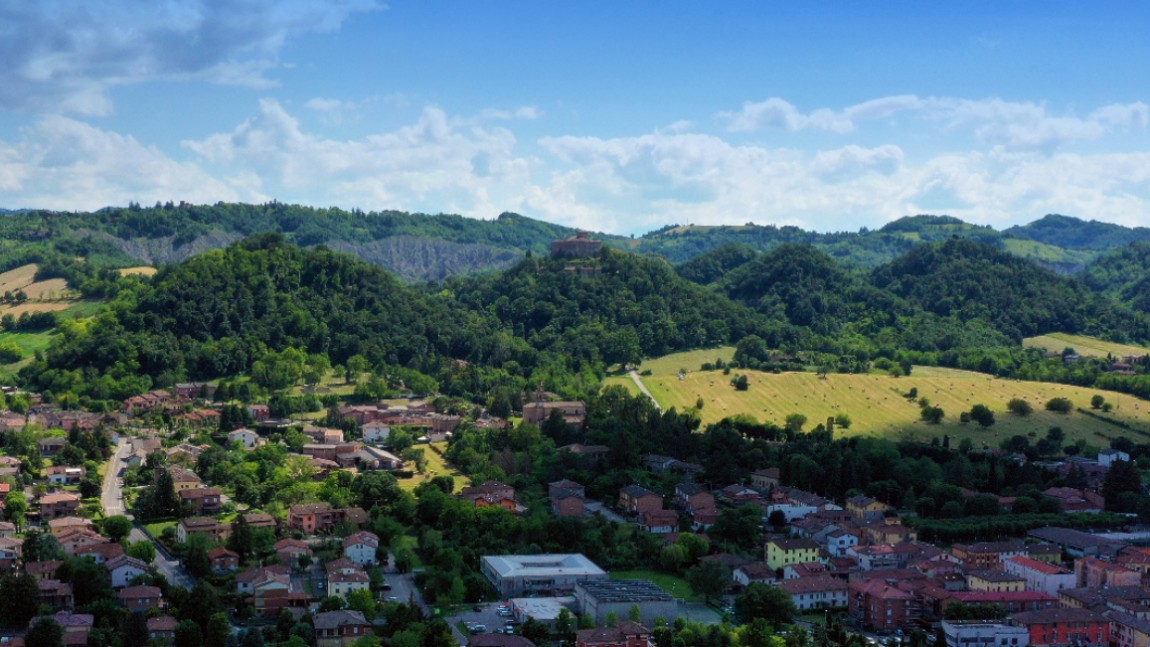 Crossing the first hills of the Reggio Apennines moving from Reggio towards Parma, once reached the town of Quattro Castella, the traveler can’t help but notice the natural beauty of the four hills named, from east to west, Monte Vetro, Monte Bianello, Monte Lucio and Monte Zane. On each of these a castle once stood.

The four fortifications, probably founded in the IX-X Century, were defensive outposts in a first line of defence for the Canossa domains against attacks from the north. Of the ancient and mighty group of castles, which once stood on top of the four hills, only that of Bianello is still visible today.  The other three fortresses are instead reduced to ruins, surmounted by the mighty chipped male towers.

In addition to the undoubted artistic-monumental value, Bianello Castle has an immense historical value, linked to the life of Matilda of Canossa, one of the most interesting historical figures of the European Middle Ages.  Founded as a watchtower, it was purchased by Beatrice of Lorena, Matilda’s mother, in 1044 and became one of the family’s favorite residences.  In the Bianello castle Matilda of Canossa hosted Emperor Henry IV and his retinue in 1077, Pope Pasquale II in 1106 and Henry V in 1111 who crowned Matilda Imperial Vicar of Italy.

In memory of this important medieval episode an interesting re-enactment is held every year in Quattro Castella, the Matildic Historical Parade, which engages hundreds of extras in medieval costumes.

After Matilda’s death, the castle remained the property of the Canossa family until the house died out in 1742. The most prestigious rooms are those built starting from the second half of the 17th century at the bidding of Gaetano of Canossa, who had some rooms painted by artists Giovan Giacomo Monti and Baldassarre Bianchi, who also worked in the service of Francesco I d’Este in the Ducal Palace of Sassuolo.

The castle of Bianello is today a destination for around 10,000 tourists a year, attracted by its millennial history and and the naturalistic beauty of the woods of ​​the four hills. The ancient building is still immersed in a vast natural park, which extends over the four castellese hills halfway up the Colle Bellone, including the area called “dei calanchi” (badlands), for about 190 hectares of territory.

THE LIPU OASIS OF BIANELLO

Once parked the car near the church of Sant’Antonino, the castle of Bianello can be reached with a pleasant walk going up the long and suggestive avenue that leads to the village or by choosing the low path, on the left, which follows the course of the small Rio Bianello and enters the thick of the wood that cloaks the hill. Taking the second path, we continue upwards ignoring the sign for Monte Vetro and reach the rear of the castle, whic looks towards the mountain, where a secular olive grove extends near a farmhouse, sheltered from the cold northern winds by the steep rocky wall on which the castle stands.

Proceeding to the right, passing by the pond which houses specimens of agile frog, emerald toad, Italian crested newt and frog esculenta, we reach the castle, set on a natural balcony from which one can enjoy a wonderful view of the surrounding landscape. To the left of the farmhouse, at the foot of imposing calanchive formations (badlands of Bergonzano or melange of Canossa), the path starts in the direction of Monte Lucio and Monte Zane. An articulated system of paths connects the four hills in a suggestive itinerary that combines the great environmental-naturalistic interest of the area with the concomitant presence of an extraordinary historical and architectural heritage.

Taking the path that leads to Monte Lucio, through a lush meadow we enter a large fossiliferous area. We follow a steep climb, enlivened in the spring by the flowering of sage, wild garlic, buttercup and rosehip, to reach the saddle of orchids, from which one can enjoy a breathtaking view of the badlands. After a look at the tower of Monte Lucio and the archaeological excavations of the castle, in a geological landscape of great interest between outcrops of continental gravels and marine deposits (sands of Monte Ricco), we proceed in the direction of the tower of Monte Zane running into the remains of a farmhouse, complete with a wood oven and wells for taking groundwater, evidence of peasant life that reminds us that until the end of the 70s the area of ​​Monte Zane was inhabited.

In the silence of the woods, time seems to stand still and the sensation is that of being able to hear, at any moment, the neighing of a horse and turning around to be passed by a knight in medieval armor. The intensification of the birdsong and the wooden bulkheads for birdwatching on the left side of the path bring us back to reality and reveal the last secret of this enchanted place.

Going down through the forest we reach the Bianello Oasis Visitor Center, from which other paths start.  The Bianello wildlife protection oasis was established in 1982 by the Province of Reggio Emilia and handed over to Lipu in 1993. The woods of the Bianello oasis host oaks, hornbeams, ash and maples, on a rich shrub undergrowth made of dogwood,  privets and kernels.  The variety of environments creates optimal living conditions for over 130 sedentary, wintering and migratory species of birds. Among the birds of prey, in addition to the more common Poiana and Kestrel, the Sparrowhawk stands out, symbol of the Oasis.

Bianello castle together with the ruins of the other three fortresses of the municipality of Quattro Castella, is still an example of an admirable integration between medieval building and geological structure.  Over the centuries, this integration has produced a unique and unrepeatable image.

We are waiting for you, as soon as we will return to travel, to discover the fascinating history of the castle of Bianello and immerse ourselves in nature to discover the treasures of the Reggio Apennines!